Why You Should Abandon Your Sales Funnel and Replace it with a SalesMatrix Instead.

The fact that the success or failure of our efforts all came down to 3 simple things surprised me.

After all, if your business is like mine, you put a lot of effort into building sales models, tracking data, analyzing the information, and working day and night to improve your results.

But when it all comes down to it, there are actually only 3 things you can do to grow your business organically. I’ve outlined them in the image below. 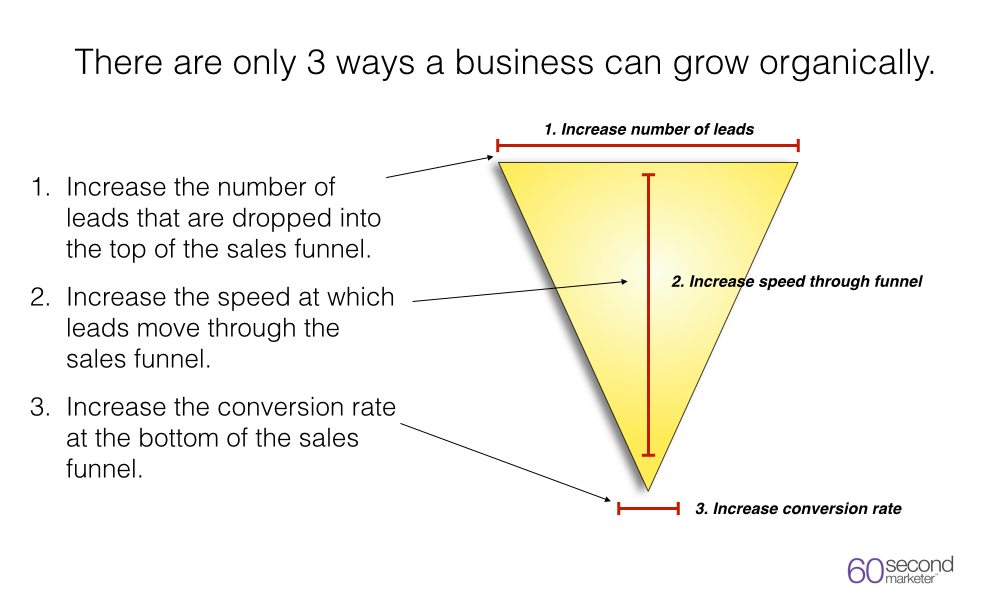 What’s interesting about all this is that most businesses spend about 99% of their time worrying about #1 and #3. They spend very little time thinking about the second option — which is to increase the speed at which a lead converts into a customer.

But as you’ll see below, if you can increase the speed at which a lead moves through your sales funnel by 30%, it can have a 50% impact on your bottom line. Don’t believe me? Keep reading.

But first, understand this — it’s time to throw away the traditional sales funnel and replace it with something better.

The traditional sales funnel was invented by William Townsend in 1924. If you worked in the B2B world, it looked something like this: 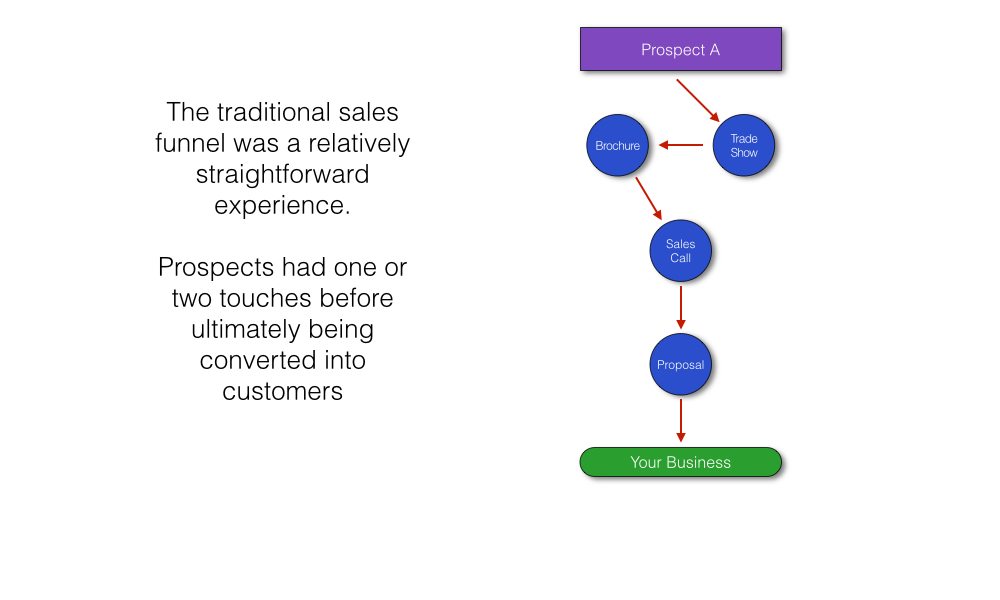 For most of the 20th century and some of the 21st century, the sales funnel concept worked fine. In the example above, a prospect would go to a trade show, be given a brochure, talk to a sales person, and then (hopefully) ask for a proposal.

It was surprisingly simple.

Today’s prospect journey is much more nuanced and complex.

You’ll notice in the image below that there are many more touch points on the way from being a prospect to being a customer. The result is that things can get pretty complex pretty quickly. 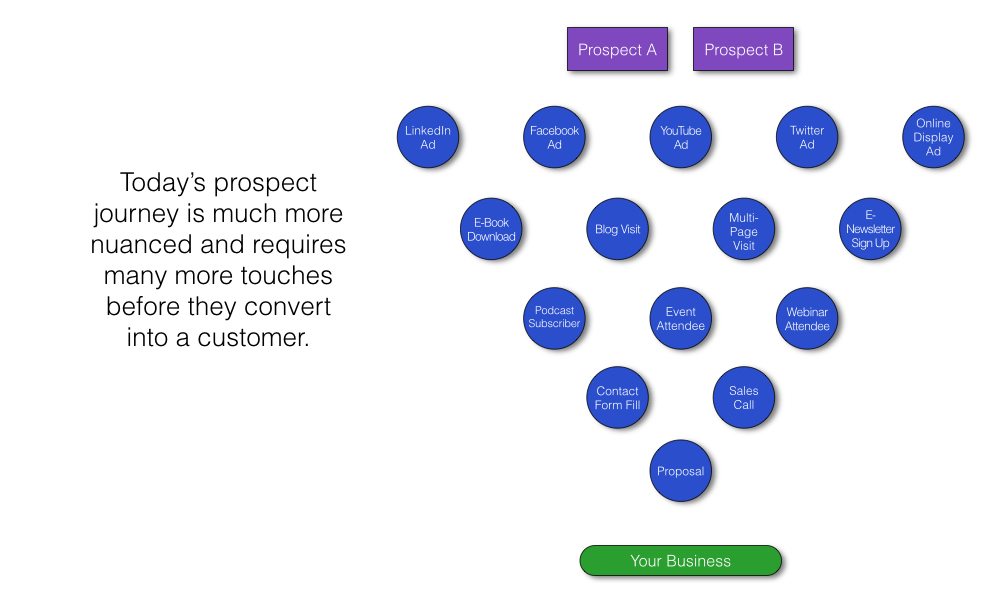 You should also notice that even with this complexity, the process still involves nurturing people through the top, then the middle, then the bottom of the funnel as seen in the image below. 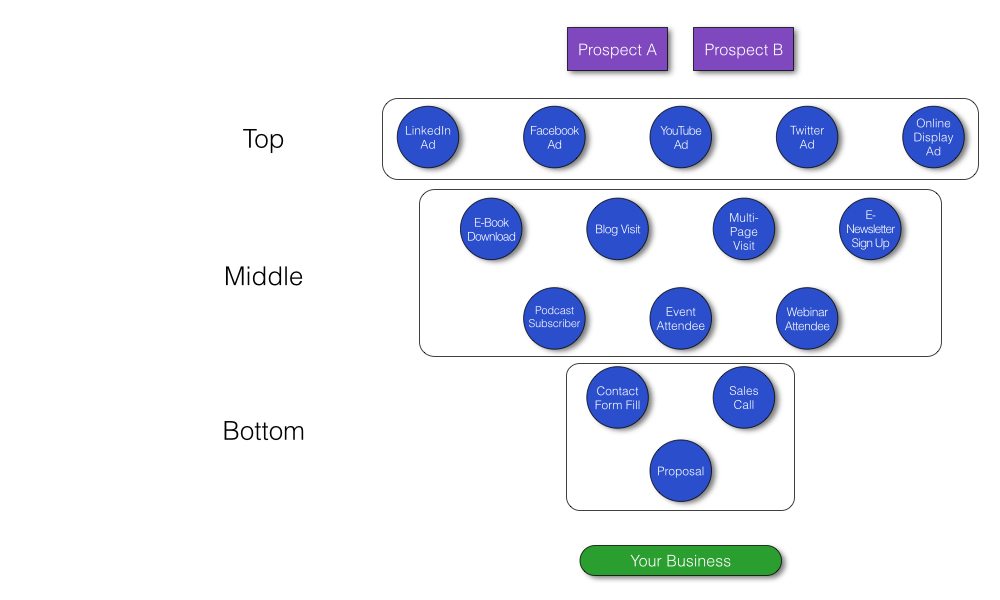 Prospect A in the image below is engaging with a lot of touch points along the way to becoming a customer. This complex journey is more like a matrix than it is a funnel. 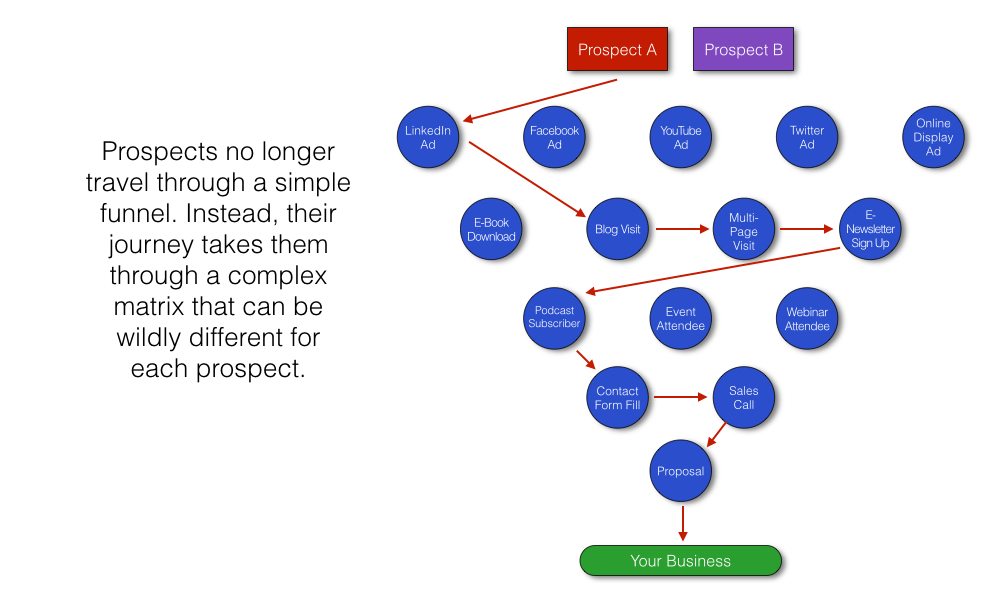 You’ll notice that Prospect A in the image above takes longer to move through the matrix than Prospect B does in the image below. If you could get more prospects to take a quicker path like the one Prospect B took, you would deliver more leads to your sales force, ideally for the same amount of money. 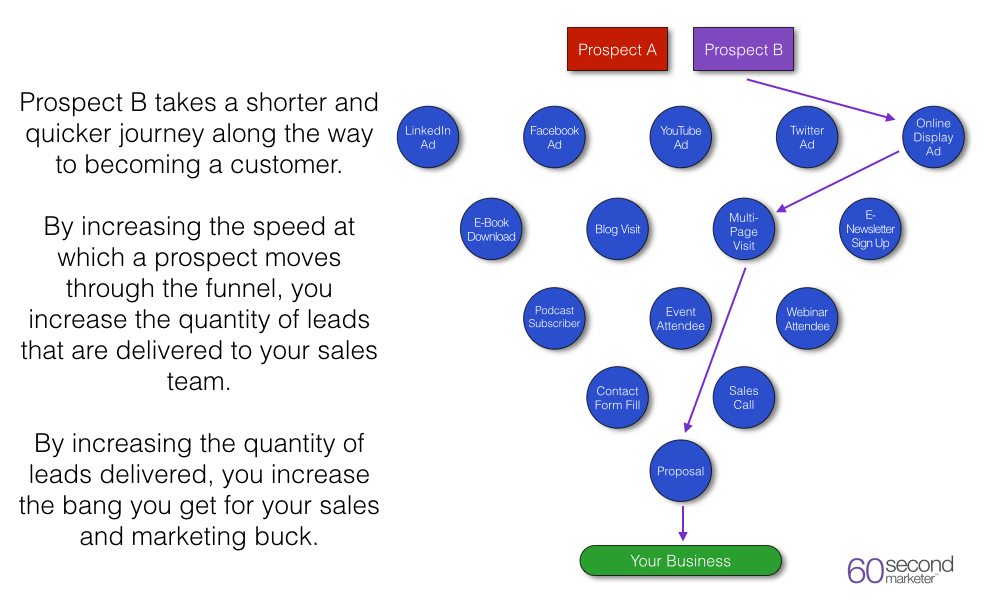 The matrices above do a better job of describing the customer journey than traditional sales funnels do, which is why we’re developing a product around it called the SalesMatrix™.

The SalesMatrix™ involves highly sophisticated tagging of prospects as they engage with an online display ad, a mobile display ad, a YouTube video, a native ad or any of the other formats that we tag and track.

By micro-optimizing each of the touch points along the way, we can improve the results on a macro level. In other words, by tagging, tracking, analyzing and optimizing, we’re able to increase the speed at which a prospect moves through the funnel.

It’s very complex and requires a lot of sophisticated technology. It’s also not inexpensive. But if you’re spending $1 million each year on your sales and marketing efforts and we increase the effectiveness of your campaign by 20%, we’ve effectively delivered $200,000 to your bottom line, which more than pays for what we do.

Here’s an example of how a business can use our technology to increase the speed at which a prospect moves through the matrix.

This is important, ground-breaking stuff, so I wanted to provide you some action steps and a recap for you.

Action steps for you.

We’ve covered a lot of ground here, so let’s do a quick recap:

Does all this make sense? Would you like to hear more about it? If so, send me an email and I can walk you through how it works and how we can apply it to your business.

About the Author: Jamie Turner is an internationally-recognized author, speaker, and CEO. You’ll find him on the 60 Second Marketer and as an expert commentator on network TV. He is also the founder of SIXTY, a marketing consultancy and advisory firm that helps clients get more bang for their marketing buck.