Did you know that using a helper video enabled one brand to bring in an extra $250k in revenue in just 45 days?

I know what you’re saying — that’s impossible — but I’m here to tell you that it’s not.

When Mimic Technologies added a Draw Shop whiteboard video to their website, prospective customers were drawn in to the video and formed a deeper relationship with the brand. The result? An extra $250k in revenue.

I know it sounds crazy, but studies show that helper videos grab are super effective at grabbing consumers’ attention and are remembered better than many other marketing tactics. In short, helper videos create a perfect sales pitch for your product or service in a very short amount of time.

5 Ways to use helper videos effectively.

Now that you know that helper videos can be a game-changer, let’s find out how you can use them to bring in new customers and drive up your revenue.

Leverage the “less is more” principle.

The human brain automatically breaks down complicated images into simple shapes, so when images are kept simple, the brain can spend less time processing the image and more time processing the information and taking in the “marketing message.” No matter how complicated the message is, helper videos allow you to convey this message with simple ideas and visuals.

Simplicity, ironically, helps these kind of videos stand out from the rest of your website. Most web pages are filled with different ads and videos playing, so eventually the brain reduces all of this to background visuals. The contrast between the black and white lines and the overall simplicity of these videos will attract eyes and lead to better results.

Use the magnetic power of the human hand.

As humans, we’re wired to pay attention our hands. The use of a human hand writing on a whiteboard draws in the viewer’s attention. Human hand drawings serve as a nice change from computer based media. As viewers follow the drawing hand, it walks them through a story which helps prevent a shift in focus. Thus, the human element incorporated into helper videos is important in the way that it locks in viewer attention.

Develop stories to grab and keep a prospect’s attention.

Helper videos are great if they can easily communicate the advantages of the product or service being offered, but if they can tell a story at the same time it really sets them apart. Viewers can recall a story more easily than just words on a page. Better still, a story paints the idea in a consumer’s head of the whole story behind a product or service. You can show the formation of a company, how products and ideas have evolved, and your motivation behind certain products or services that you’re trying to push to consumers.

Use metaphors to add impact.

In an effort to further simplify ideas for viewers, it is important to find alternative methods of communicating points, such as a metaphors. Metaphors are helpful because long term memory is consolidated in the brain through associations. When information in helper videos is presented in this way, it makes it easier for the viewer to take in and retain the ideas in the video.

Another way to simplify the ideas presented in helper videos are through graphics, pictures, or headlines. Although different from metaphors, they can consolidate a lot of information and viewers can understand them more easily. This ease of understanding is key as it will lead to better viewer take-aways and retention.

Use the power of a mentalizing network to improve the viral aspect of your video.

By keeping your viewers entertained and sparking positive emotions in them you increase the chances that will share your helper video. Humans naturally want to share things that bring up emotions and as they consider sharing things, they consider how it will make others feel.

The entertainment factor of helper videos also helps drive web traffic. The more popular your helper videos are, the easier it is to move your site’s URL towards the top of search engine lists. 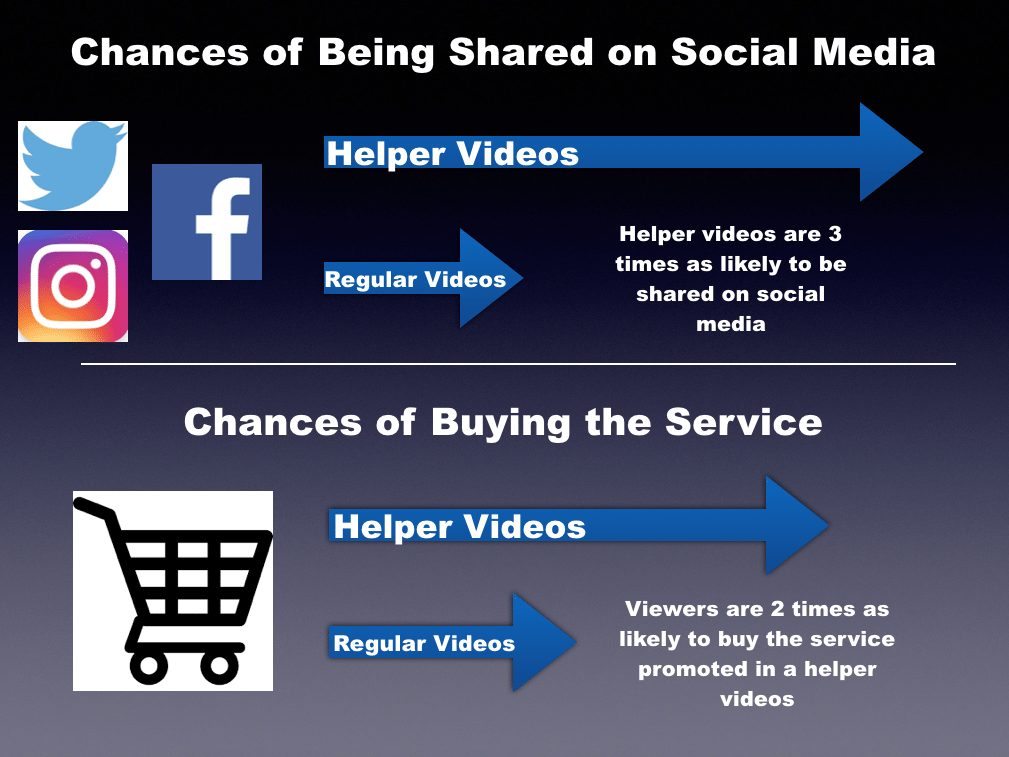 Andy Andrews used a helper video while trying to promote his book, How Do You Kill 11 Million People: Why the Truth Matters More Than You Think. It received 128,014 views in just 7 days compared to the 11,432 views his previous video had received in 10 months. It is interesting to note that 86.3% of views came from shared links outside of youtube.

How we used a helper video for our Mobile X Festival.

We used a helper video from The Draw Shop (below) to help promote our Mobile X Festival and explain the concept behind it. Using simple illustrations and metaphors, they were able to help us explain ideas such as an un-conference and a mobile accelerator. The use of this incredibly helpful marketing tool undoubtedly led to a great deal of our success with the Mobile X Festival.

Action steps for you.

Now that you see how productive these videos can be, you may be wondering where to go from here. Here are some next steps to help you on your way.

Now that you’ve laid out the foundation for your helper video, the next step is to kick-start the program. Just reach out to your team and get the party started!

About the Author: Trevor Cefalu works in account management at SIXTY, a marketing optimization firm that helps companies improve the impact of their marketing by 10% or more. He also helps develop content for the 60 Second Marketer.