What is Nonlinear Marketing? We Have the Answer.

What is the definition of Nonlinear Marketing? A lot of people are asking that question. Given that, I thought I’d shed some light on what Nonlinear Marketing is and why it’s getting more and more attention from businesses around the globe.

Brands like Starbucks, Apple and Red Bull are shifting from Linear (Traditional) Marketing to Nonlinear Marketing because it's less intrusive and more effective.Click To Tweet

Marketing is the act or process of selling or purchasing in a market; the process or technique of promoting, selling, and distributing a product or service; and/or an aggregate of functions involved in moving goods from producer to consumer.

That seems a little cumbersome to me, so here’s a more concise definition that I came up with: Traditional marketing is the process of creating demand for a product or service via platforms such as TV, radio, outdoor, print, social media, word-of-mouth and other channels.

My definition is a little straightforward, but for our purposes, it clarifies what marketing is and what it’s supposed to do.

Now that we have that all lined up, let’s talk about one of the biggest problems with Linear Marketing — people really don’t like being marketed to. To be more blunt, they hate marketing and advertising because it intrudes on their lives and interrupts what they’re doing.

This is a big problem for marketers because it means that anything marketers do to sell their products or services has friction automatically built into the process.

That’s why Nonlinear Marketing is such a transformative idea.

Here’s our definition of Nonlinear Marketing:

Traditional marketing is disruptive, intrusive, and uninvited. Nonlinear Marketing is is woven into the fabric a consumer’s life.

For an example of what this means, take a look at how Starbucks has approached marketing for its entire existence. Does Starbucks run a pile of intrusive TV commercials that interrupt viewers lives with messages that try to sell the brand? Nope.

Instead, Starbucks let’s the brand become part of the fabric of the consumer’s life.

This is accomplished because they have a relentless focus on the ancillary aspects of their brand. In other words, instead of spending millions on TV advertising, they focus on how their prospects and customers experience the brand in every aspect of their lives.

To do this, they focus a lot of attention on details like the color of the wood used in their stores; the slightly quirky yet pop-ish music that plays in the background; the layout of the sofas in their lounge areas; even the way their baristas greet you.

Of course, Starbucks’ use of Nonlinear Marketing goes beyond just what they’re doing in-store. Their MyStarbucksIdea.com website is designed to make sure the consumer participates in the brand’s life, too.

Nonlinear Marketing isn't about a brand having a monologue with customers -- instead, it's about customers having a dialogue with the brand.Click To Tweet

Consumers are asked to provide ideas and concepts that Starbucks can use to improve their product and service. And they do! Several of the ideas that have been submitted have been used by the company quite effectively over the years.

Starbucks isn’t the only brand that’s using Nonlinear Marketing. Other brands that use it (to varying degrees) include Red Bull, AirBnB, Lego, Coca-Cola and Apple.

It’s important to note that Nonlinear Marketing isn’t a tactic, it’s a strategy.

In other words, if you do a single campaign that engages prospects and customers with your brand in a nonlinear way, that’s just a single tactical implementation of the concept.

For a brand to genuinely use Nonlinear Marketing, it has to envelope every aspect of the organization and the brand. In other words, it’s not about a single campaign, it’s about the brand thematically becoming part of their prospect’s and consumer’s life experience. 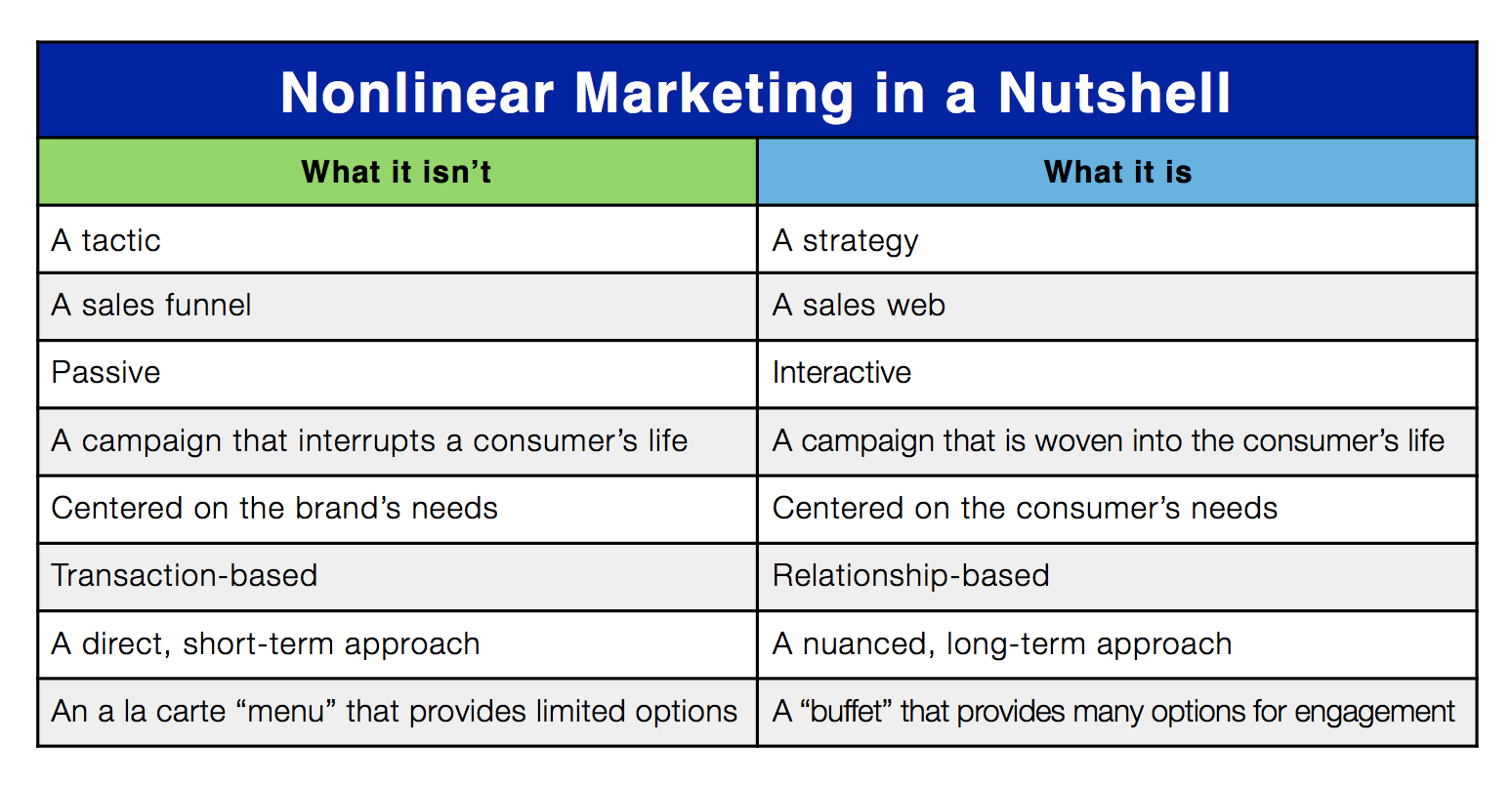 In the end, Nonlinear Marketing will become the preferred technique used by businesses because both consumers and brands will find it more palatable and effective.

The 20th Century was dominated by Linear Marketing. It came in the form of TV commercials, radio commercials, billboards and other intrusive forms of advertising.

The early part of the 21st Century saw a shift that started to take place where marketers realized that Nonlinear Marketing was the wave of the future. Only a handful of companies caught on to this in the early part of the century, and most of those didn’t identify it as Nonlinear Marketing, but as time goes on, more and more businesses are adopting the strategy and calling it by its proper name.

Does this mean the end of TV, radio, billboards and other forms of Linear Marketing? Not really — those channels aren’t going away any time soon. But does it mean that sophisticated brands will be moving more of their budgets over to Nonlinear Marketing channels that become part of the fabric of people’s lives? Absolutely.

Sophisticated brands are starting to shift more and more of their budgets away from Linear (Traditional) Marketing and over to Nonlinear Marketing.Click To Tweet

About the Author: Jamie Turner is an internationally recognized author, speaker, and CEO who speaks about business, digital media, and leadership at events, conferences, and corporations around the globe. He has been profiled in one of the world’s best selling marketing textbooks, is the author of several business books, and can be seen regularly on CNN and HLN. He can be reached at +1-678-313-3472 or via email at Jamie.Turner@SIXTY.Company.