What Google Doesn’t Get About Search 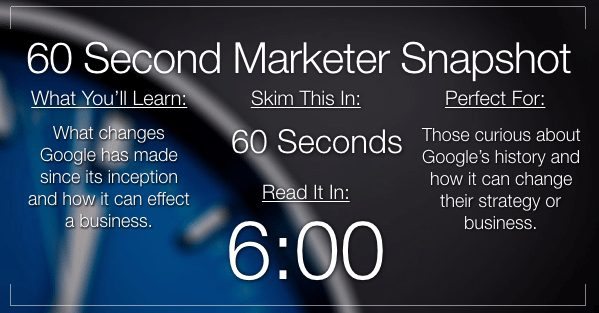 It was 1990–something, when I decided online marketing was my gig.

At that point I didn’t know the “how” or the “why” of it.  I just knew it was where I belonged.

It had been spoken of for some time.

Google’s goal was to make my life, as a Marketer, one of simplicity.

Invent something powerful like a global search engine, and the first thing you will find are those who are willing to exploit it.

Google wanted to provide an easy way to find content.

Instead, they found themselves inundated with keyword cramming, hidden text and a host of other black hat methods that worked.

Thus, this led to Google serving garbage for content.

Per Moz, Google has waged war against the spammers and has been largely successful.  Unfortunately, there have been unnecessary causalities in this war just like any other.

The one that hit home hardest for me occurred in the summer of 2015.

I had a thriving Local SEO practice at that time, based on Googles 7 and 10 packs.  Then, practically overnight, everything changed to the 3-tiered Snack Pack.

My business took a serious hit.

To make matters worse, it was right before my 1600-mile solo bicycle ride, which I almost cancelled but didn’t.  However, that’s a story for another time.

Which of Google’s updates has affected you most?  Share your thoughts in the comments below.  I know my hardship was by far not the only one to have been had.

Or so we hope.

At least till the next update rises to cause corresponding havoc.

One must admit that search results of today are far better than they used to be.

It’s no secret that Google is in the business of search.

If they serve content that appeals to the spiders only, then they will lose their human audience.  That’s why Google is pushing hard for user experience search results.

Appeal to users and secure their confidence leading to 65% (or more) of the search volume.  That’s not going to happen by knowing best strategies for connecting with the bots and spiders while ignoring the human equation.

However, I believe Google is taking a reactionary position against the troubles it has endured.  Herein is the problem.

Grabbing one’s toy doll away from another simply because one doesn’t like the way that the other is doing things, isn’t a move of authority.  It’s childish.

Demanding that you do things my way or not at all isn’t professional, it’s selfish.

It is my own personal view that Google should be coming from a position of proactivity rather than reactiveness.  In proactivity, the stage is set prior to any offense arising.  In reactivity, the defense is conjured up only after seeing the unpleasant things that another is doing.

Reactivity leads the one who is attempting to regain control into over doing things in incredibly unprofessional ways.

I’m not saying that Google shouldn’t release updates to counter malicious activity.  I am saying, that it would have been far better to set the stage before those who were determined to break things even arose.

Why This Matters Most

Doesn’t Google want human based results on their search engines.

Yes, this is true.  However, now we are seeing the rise of a whole new type of trouble.  Even though it is true the search engines are getting smarter, basing everything only on the human equation causes its own set of strange results.

For example, a Blogger could create a perfectly good piece of content but because the keyword density was to high it gets devalued.

What about all the content that was previously available before Google’s push toward human search results took place.  Some of those items were very well done, for the Google of that day.

Remember when EZine Articles was caught in its own trouble with Google?  Their platform is one of the best in existence for publishing articles, and yet overnight they were practically taken out of the Google rankings until they conformed to the search engine giant’s new rules and regulations.

I Believe in A Balance

But removing all things related to optimizing a listing on a page, is not, in my opinion, the right answer.

Perhaps, creating a cohesive balance between human readers and the spiders would be a better option.

To understand where Google is going, let’s take a brief look at where they have been.

Back before Google had its user driven results there were such concepts as meta data.  In fact, you still hear these words in optimization strategies today, but they are nothing like they used to be.

One of the first concepts to be lost was meta keywords.

Today, if you build your content around such terms as keyword density and placement on the page, your content is not likely to rank well on Google.

In fact, some have said that if Google could get rid of all the people trying to manipulate their search engine results, they would be happy.

And, in fact, that’s what they are working hard at doing in today’s world.

It’s all about content today, and lots of it.  Content that is easily readable with a quick eye scan.

Seems like the more you have the happier Google is.  1500+ word articles are preferred.

Content that can be engaged with by people sharing on social media, commenting on within the post itself and spending time reading all catch Google’s attention.

Even better if the viewer goes to a few different pages in the process.  This means that internal linking of your Web content is still welcomed by Google.

What Has Google Missed?

Despite their perceived improvements, I believe the method of pure user experience has two serious flaws.

First and foremost, long articles do not necessarily mean greater value.  That’s why there needs to be a balance between length of article and optimization of page.  It allows for the best of both worlds to be realized.

The second problem is that social networking be it through bookmarking and/or networking can be gamed.  The interaction of blog comments can also be manipulated.  So, the question arises, is Google really accomplishing anything at all, or just having to deal with a different set of parameters around which their results are being manipulated.

While I am certainly for providing the highest quality of value to those using Google search, I’m also not convinced that where Google is heading today, is the right answer.

Let me ask you a question.

If you oversaw Google, what would you do to create the best user experience available in the market?

Leave your comments below and let’s talk Google.

Guy Siverson is a Guest Blogger who has spent over 20 years helping people succeed on the Web.  His latest work empowers Affiliate Marketer’s to prosper financially.  One of his latest articles tells the story Of Freezer’s, Brides and Your Affiliate Marketers Dream.  He is available for private consultations as well as live or virtual speaking engagements by calling 702-439-4766 during normal business hours.