Anything You Can Do, I Can Do Better: Why Female Entrepreneurs Beat Men At Business

At some point in their lives, most young girls embark on some sort of business venture, whether it’s a lemonade stand, selling homemade “slime” on Etsy, or simply selling Girl Scout cookies to their relatives. As it turns out, parents would do well to encourage this entrepreneurial spirit. Several studies indicate that female business owners may be inherently more savvy, and likely to succeed at starting their own companies, than men. 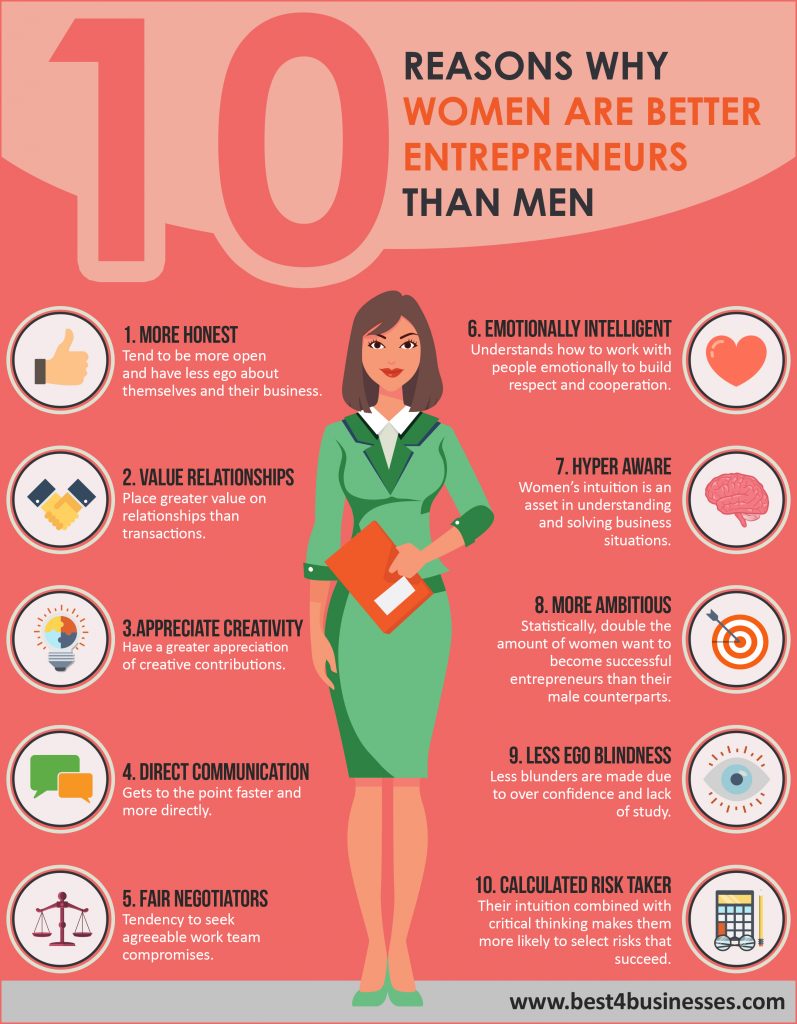 The ranks of female entrepreneurs are increasing each year, and with good reason: women who own businesses tend to take realistic risks and big-picture views. They use confidence, honesty, ambition, and grit to overcome obstacles.

In many cases, these women are second- or even third-generation entrepreneurs, who have learned from their parents how to run an effective business.

Who Are Today’s Female Entrepreneurs?

The 2016 BNP Paribas Global Entrepreneur Report, based on a survey conducted by the Scorpio Partnership, provides some fascinating insights into the global population of female business owners.

Several trends that emerged in the analysis reveal a fascinating snapshot of today’s female entrepreneur.

The Millennial generation is well-known for its members’ rejection of traditional career paths, so it comes as no surprise that “millennipreneurs” are one of the fastest-growing demographics in business. These young movers and shakers are motivated as much by their own passions as by satisfying a demand for the services or products they’re offering.

Millennials don’t tend to open craft breweries or ferment their own kimchi simply because their neighborhood needs another brewpub or purveyor of probiotics. They’re not impulsive about it, however; the fact that Millennial-led companies have a 43% lower turnover rate than that of their Boomer counterparts attests to their market-research due diligence.

Additionally, a whopping 78% of entrepreneurs age 35 or younger — both male and female — are following in their parents’ footsteps. This is significant for two reasons. Such second-gen business owners are likely to have learned from their folks’ mistakes (and successes). It may also account for their overall resilience and willingness to begin again if one venture doesn’t work out.

Although the United States was voted the top location in which to base a small business, American women are increasingly being joined by their sisters from China, India, Turkey, Belgium, and Germany.

Nearly 70% of Chinese entrepreneurs surveyed said that profits were up from the previous year. Female business owners in China also place a high value on corporate social responsibility.

She Competes with the Big Boys

Only when it comes to number three do the genders diverge, with women choosing fashion businesses and men opting for tech.

Anything You Can Do, I Can Do Better

So what makes these female business owners so successful? Another study, this one conducted by the U.K.’s Centre for Entrepreneurs, discovered some surprising results when they polled over 500 C-suite executives and entrepreneurs.

The Centre’s think tank indicates that women in business, although confident, are less likely to be overconfident than their male peers. All other things — but most importantly, the financial health of their ventures — being equal, only 42% of the women said that business was booming, while 62% of men gave the same response.

Women are also more inclined than men to be honest about the challenges their companies face. Perhaps because their egos are less invested, they are able to ask for help in a direct, effective manner. Additionally, these female entrepreneurs (particularly Millennials) don’t hedge or make excuses; instead, they face the pertinent issues head-on. This allows them to pivot faster and to fix what isn’t working before it derails the whole enterprise.

They Take A Longer-Term View, and Calculate The Risks

The same study reported that 80% of female entrepreneurs reported seeing opportunities where others saw risk, compared to just 67% of men. This may be due to women’s ability to take a longer-term view of their business. While men tend to “get in and get out” of ventures, with an eye towards quick profit, their female counterparts are more apt to reinvest profits, and to value slower but steadier growth.

It’s a cliche that, in the corporate world, women have to work harder than men to achieve equivalent goals. The Centre of Entrepreneurs study affirmed this, or at least the perception of it: only one in 20 men copped to having inadequate technical know-how to make their business succeed. One in five women admitted their inability in this regard. There was a similar disparity when respondents were asked about their professional networks.

Here’s the kicker, though. Despite these gaps, the women in the study took home twice as much money as the men.

This revealing finding might be related to women’s higher levels of “grit,” author Angela Duckworth defines as a particular combination of passion and perseverance.

More than just stick-to-it-iveness, more than just belief in their own vision, grit may be hard to pin down, but it’s an uncanny predictor of success.

Additionally, women are unlikely to rest on their laurels when it comes to starting businesses. Nearly half of the surveyed female entrepreneurs (47%) expressed interest in undertaking a new venture within the next three years. Men? Not so much. Only 18% of them wanted to start the process all over again, when their current business was already thriving.

Are you an established female entrepreneur? Then keep on keepin’ on, girl!

In all seriousness, there are a few key points to take away from these findings, no matter whether you’re male or female, a Baby Boomer or a Millennial, live in Belgium or Baltimore.

Have courage and confidence in your business venture. Find your passion, and use it to fuel your “grit” — but don’t neglect the fundamentals, like conducting market research and establishing a business plan.

Remember your long-term strategy for success; in the meantime, don’t be afraid to start up another business. Stay confident not just in your own skills, but in your networking abilities. Leave your ego at the door, so that if you fail, it’s easier to pick yourself back up again and try something new. Approach whatever issues befall your business — and issues will befall your business; it’s the nature of the beast — with honesty, directness, and courage.

Interested in reading more on this topic? Check this out: Business Ideas for Women 2017

About the Author: Marsha Kelly sold her first business for more than a million dollars. She shares her hard-won successes as an experienced serial entrepreneur on her small business blog, Best4Businesses. You can also read at Writerzone her regularly posted business tips, ideas, and suggestions — as well as product reviews for her valued readers.