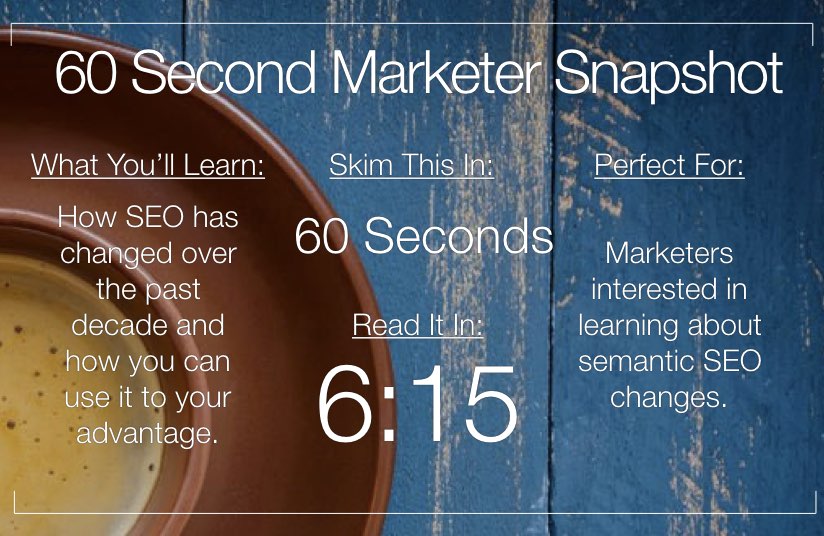 SEO has changed completely over the past decade. What worked in the early 2000s rarely works the same in 2017.

Unfortunately, not everyone in the digital marketing game has caught up to what matters today. After I recently commented on another post here on the 60 Second Marketer offering an opposing opinion to that of the author, Jamie thought it would be a good idea to flesh out the topic further.

So here I am to do so. Let’s start with the basics.

What the Heck is Semantic SEO Anyway?

We hear the term “semantic” bandied about a lot these days. It would be easy to dismiss it as a passing fad, but that would be a mistake.

Semantic SEO is a completely new way of ranking websites. Let’s look at some history before digging into the various aspects of Semantic SEO.

How Google Evolved From the Old Ranking Algorithm to the New

After the SERPs turned into a spammy mess about a decade ago, Google was forced to up their game.

The first order of business was to clean up all of the black hat SEO tactics that we saw so much of. This was done through a series of penalties and major algorithm updates. Although there were dozens to speak of, two of them were the most impactful. You’ve likely heard of both of these:

Once Google started to make inroads on better identifying quality and authoritative content and domains, they were able to make the biggest switch of all: a focus on search intent. This is what we have today.

Remember the Google Hummingbird update? For those of you who do not, it was a major algorithm overhaul that Google started rolling out in July of 2013.

Hummingbird flipped everything. It was the search engine’s foray into intent-based search results. They later evolved even more to what we now call RankBrain, which is described as an Artificial Intelligence engine behind the way Google indexes and ranks websites. The goal of RankBrain is to serve up the most relevant results, even if a single keyword being searched does not appear on the page being ranked.

The logical next question, then, is what this has to do with Semantic SEO. The answer: everything.

Semantic SEO is the new way of ranking content and websites that focuses on matching results to the intent of the user, and is driven more by topics and “entities” than by keywords and volume of links.

I know, that’s an earful, so let me elaborate.

What are Semantic Topics?

Based on the way I’m presenting all of this, it may appear that keywords are no longer relevant. While that’s partly true, it’s an overly simplistic conclusion.

Keywords are very much still relevant, but not the same way they used to be. A topic in this case is based on a collection of similar keywords: shorter and longer tail versions, synonyms, and phrases that suggest the same intent. Collectively, these represent a topic.

What this means is that the days of picking 10-20 keywords with high search demand and tracking movement of those keywords on a daily basis are over for the vast majority of websites.

Only gigantic websites with high domain authority (a proxy metric from Moz that estimates how authoritative a website is for ranking on Google) can expect to show up atop the SERPs (search engine results pages) for keywords with a ton of search volume. For the rest of us, we have to focus on semantic topics to earn a fair share of the overall search traffic.

Heck, Google has gone on record stating that as much as 25% of daily searches have never happened before. That’s right, ¼ of searches on Google are being done for the first time…ever.

So while keywords still factor into the equation, we should no longer be looking at ranking as the “be all / end all” metric.

What should we be using instead? Three things: Increase in Domain Authority, growth in overall organic traffic, and number of keywords ranking.

A good semantic SEO strategy will have you ranking for thousands of keywords that can each drive traffic. More keywords ranking, more organic traffic. And Domain Authority is the leading indicator to both of those end results.

As another piece of semantic SEO, we should all be familiar with entities. Today, we can add semantic markup to our websites. This markup tells Google what entities you are showing in your content, and all search engines now process semantic markup just as Google does.

An entity can be one of hundreds of content types. We have semantic markup for physical location, phone numbers, recipes, music lyrics, people, organizations, products, and many dozens more.

Some of these entities are verified by Google using other means as well, but semantic markup is the best way to “spoon feed” indicators to search engines of what entities you should be ranking for.

To learn more about semantic markup and how to use it on your own website, have your developer review http://schema.org/.

It is fairly easy to surmise why semantic SEO matters for ranking content in typical organic fashion. That’s not the whole story.

Here are other ways the semantic SEO was not only a shiny new feature on Google, but a must have in the end:

If Google had let the SERPs run amuck years ago, they would have risked their very existence. When people search, they want to get the best possible results and the cleanest SERPs.

Today, you can search for almost anything and find the answer to your question. In fact, with RankBrain and intent based matching, more people are just asking Google questions rather than searching for keywords.

This is why it pays to have topic-based content that directly answers questions, with topics such as “How to…”, “Why Does [??] Occur,” and “What Does [??] Mean.” It’s directly speaking to current search behavior, and highly relevant to the user experience Google is trying to present.

Mobile search has introduced a whole new range of potential for relevance. Location is perhaps the biggest one – Google can serve up results based on proximity now. This is why Local SEO and location markup are so important. It factors directly into Google’s intent-matching calculations, helping them provide the best answer to searches for businesses and services in the local vicinity.

Add in that mobile searches now account for more than half of Google’s volume, and this is simply a must-have. Mobile most certainly accounts for a significant share of the “first time ever” searches I mentioned earlier – with tiny keyboard UIs, typographical errors are all over the place. But Google can match them nonetheless.

With Siri, Cortana, and the other voice assistants showing up on all sorts of devices, voice search has become a crucial need. But as we all know, these assistants don’t always properly transcribe what you are saying. I laugh constantly at what sorts of gibberish Siri serves back up to me on my iPhone.

With inexact transcription, we get searches that get quite amusing! And surprisingly, Google is very adept at surmising what the search was meant to be. This is the magic of intent-based and AI-driven SERPs. Voice search is finally starting to become a viable reality in 2017.

I could pen an entire post about the Knowledge Graph, so I won’t go into too much detail here. If you have ever searched Google and had them serve up the information box at the top of the SERP with the answer to your question, or the information box to the right of the search results showing a company or other entity, you’ve seen the Knowledge Graph.

And guess what factors heavily into what goes into the knowledge graph – structured data. That structured data is precisely what you’re spoon-feeding the search engines when you use semantic markup to define entities.

So now, semantic SEO extends beyond just indexing and ranking to an immediate answer, right there on the Google SERP. If you want to get into the knowledge graph, semantic markup is a must-have.

Semantic SEO can be a confusing concept at first, but it’s really quite logical once you look beneath the cover. Hopefully this post helps you better understand what it takes to increase your organic visibility today, and enhances your ability to set better modern key performance indicators for your ongoing measurement of your digital marketing efforts.

About the Author: Tommy Landry is the President and CEO of Return On Now, an SEO, SEM, and Content Marketing firm based in Austin, Texas.