Is Social Media Still Effective? We Analyzed 29,047 Posts to Find Out

When it comes to utilizing social media as a marketing or communications tactic, a few things have always concerned me:

In summary, I’ve often felt social media is disproportionately emphasized, in marketing and journalistic circles at least, relative to its impact.

Perhaps this is because it’s accessible and marketers and journalists enjoy using social media, or perhaps it receives disproportionate attention because journalists and other public personalities, as well as marketers, are more active on social media than the average person.

For these reasons and more, we wanted to gain more insight on how well brands perform on social media. To do this, we pulled publicly available data on the world’s top 100 brands e.g. Netflix, Tesla, Adidas, Disney, etc., from Facebook’s API.

Our key findings are outlined below, alongside supplementary research.

To be clear, I’m not dismissing social media as a marketing or communications tactic. In fact, in some cases I think it can prove tremendously useful (particularly if you’re a PR professional or a journalist).

Moreover, if you create high quality, professional content, it’s likely to have a positive, albeit indirect, effect on marketing performance across other channels (e.g. acquiring links, brand awareness, etc.).

However, such effects are far more difficult to quantify and whether you choose to utilize social media should be, like any tactic you choose to utilize, dependent on whether you need to demonstrate a ROI (as is the case for many organizations with restrictive marketing budgets), and your strategic priorities i.e. it shouldn’t be treated as something brands do by default.

Of the world’s top 100 brands (as pulled from Interbrand), only two (Tesla and Apple) don’t maintain an active Facebook presence, and one of those brands (Tesla) only recently deleted its page.

With some of the world’s biggest advertisers e.g. Procter & Gamble, Unilever, etc., re-evaluating social media or cutting digital marketing budgets owed to brand security concerns, poor performance or inconsistent metrics, it’s more important than ever to determine why you’re using social media, how effective it is and whether there are more appropriate tactics for reaching your target audience (either online or offline).

Do people use social media to interact with brands?

According to a Forrester study from 2015, the average engagement rate for the world’s top 50 brands on Facebook was 0.22 percent. 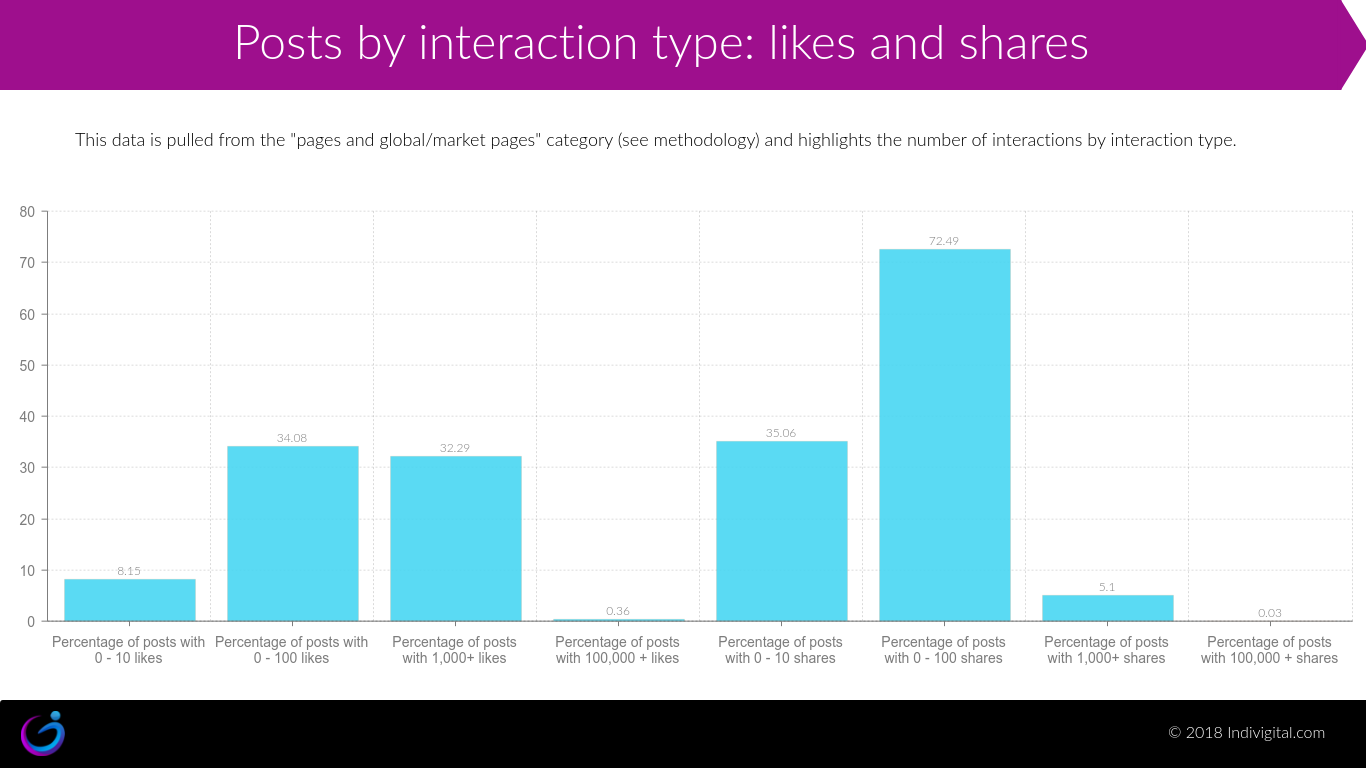 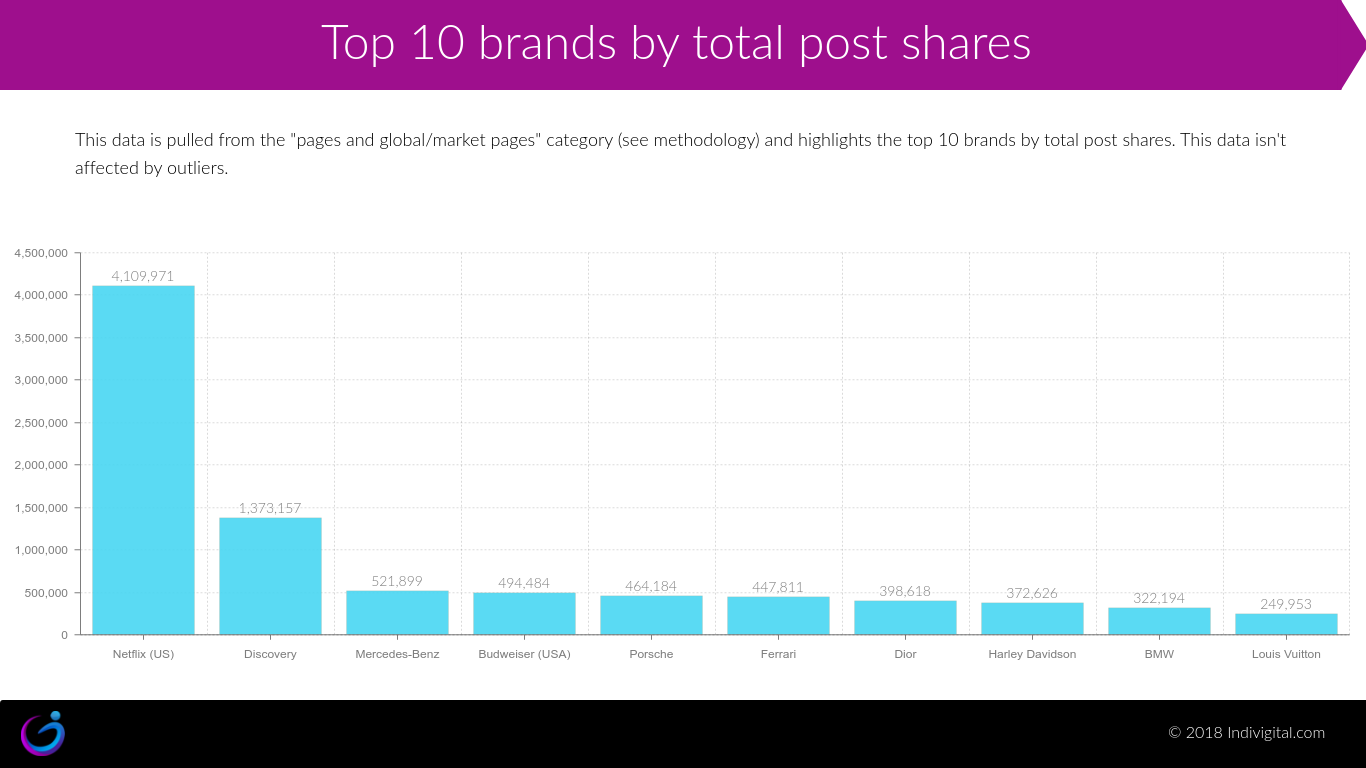 The histogram posted below also details the distribution of post likes across all 100 brands. 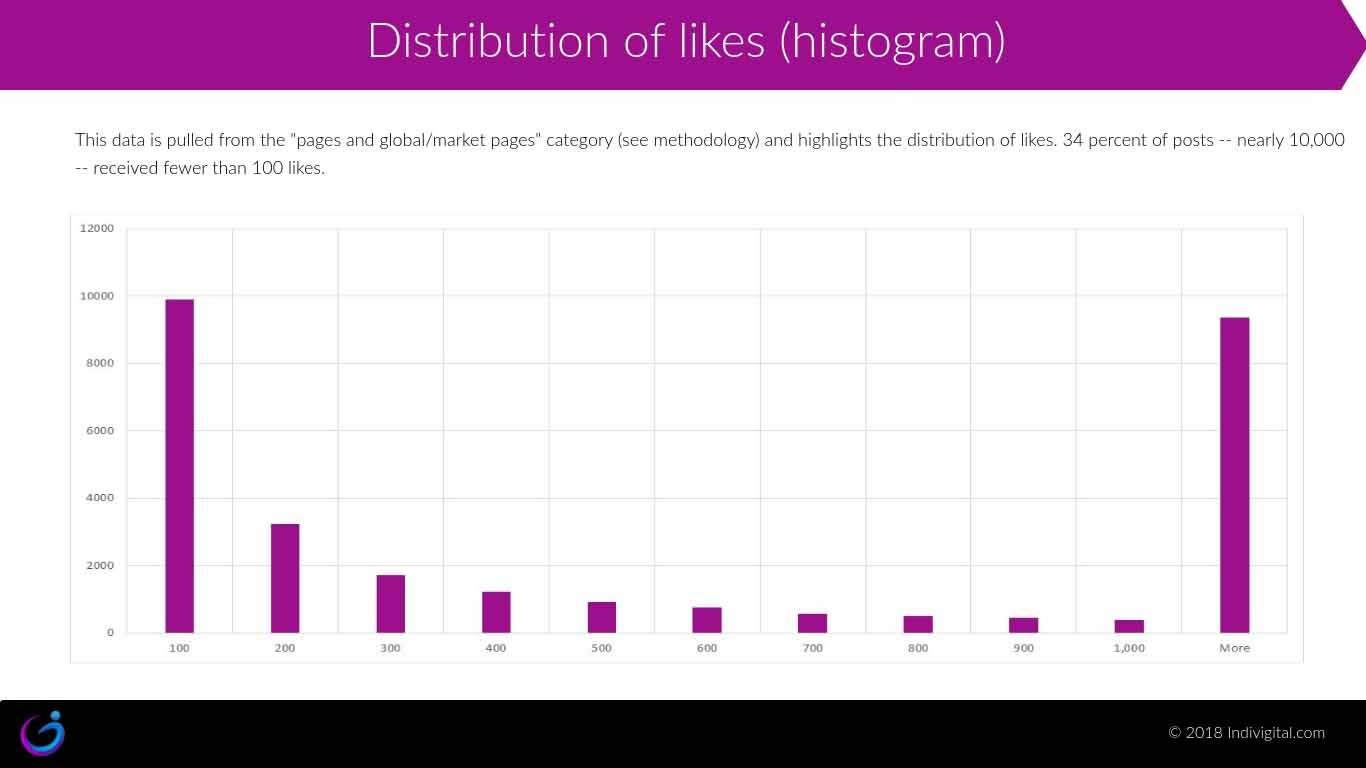 We also created a histogram to show the distribution of post likes in increments of 1,000. 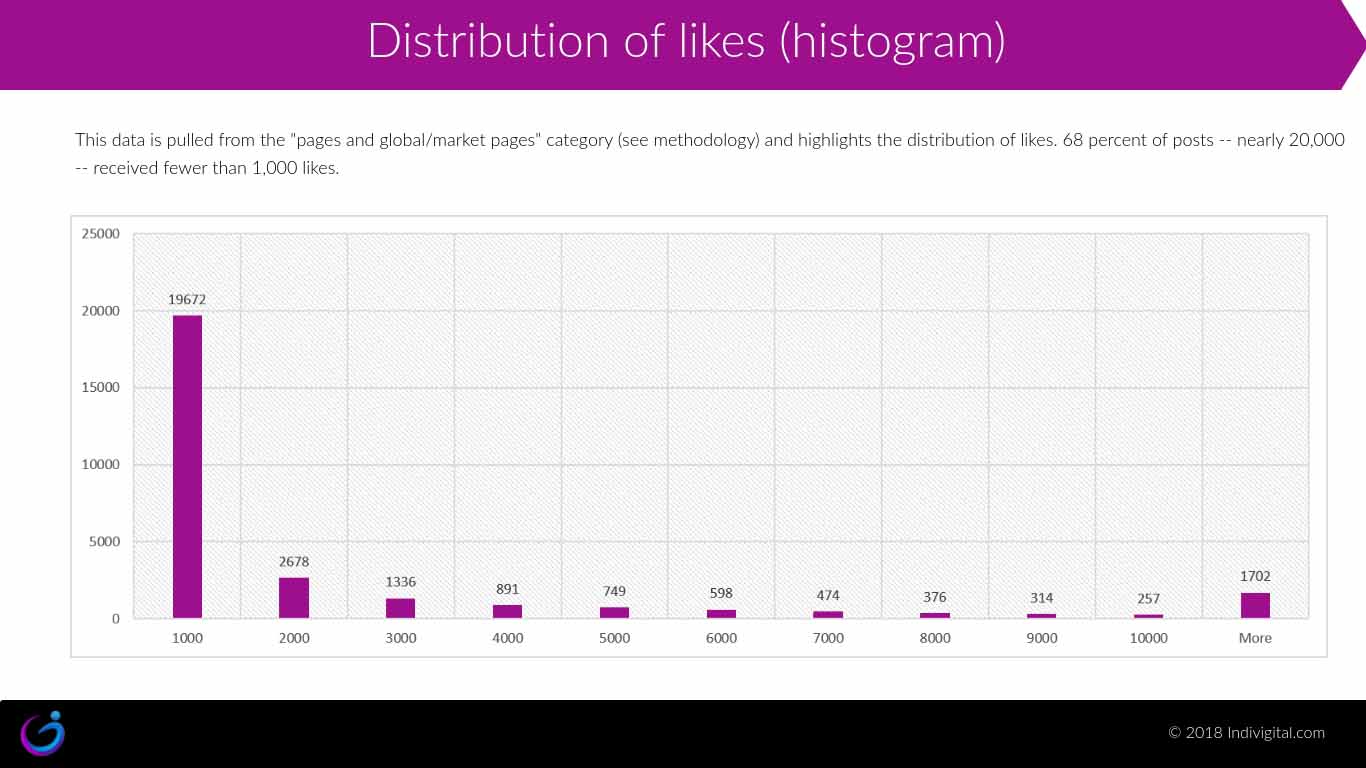 When evaluating the effectiveness of social media as a marketing or communications channel, it’s also important to address why people use social media.

According to Australian-based research organization Sensis, 89 percent of users utilize social media to “catch-up with family and friends” (this is by some distance the most popular activity) while only 18 percent use it to “follow or find out about particular brands or businesses”.

Marketers spend a lot of time on social media…is it time well spent?

According to a recent survey of nearly 1,000 social media professionals by Simply Measured, 61.4 percent of respondents identified measuring ROI of social media as one of their top three challenges.

The second most common challenge cited, as selected by 35.5 percent of respondents, is “tying social [media] to business goals”.

Is it justifiable to spend this much time on a tactic marketers struggle to attribute?

Then again, perhaps the desire to make ROI directly attributable to marketing campaigns is a demand unfairly reserved for digital channels.

After all, digital channels enjoy the benefits and features of digital analytics platforms, and it would be at best more difficult, and at worst next to impossible, to directly attribute sales to offline creative.

Aside from marketers, it’s also clear journalists are one of the most active groups on social media.

According to a study from Triggertrap published on Medium.com in 2015, journalists account for 24.6 percent of all verified users (which is the largest share of any group analyzed).

According to analysis of 87 million website sessions and €230 million in online revenue by Wolfgang Digital in 2016 (PDF), Google organic search contributes 41 percent of all e-commerce revenue and is the biggest revenue contributor for e-commerce websites.

Facebook organic is the biggest social media contributor despite only accounting for 2 percent of all e-commerce revenue.

The average (mean) organic search traffic contribution to the brands above is 37 percent. According to our research of the top 100 brands, general e-commerce brands were the worst performers overall, with an average Facebook engagement rate of 0.005 percent. 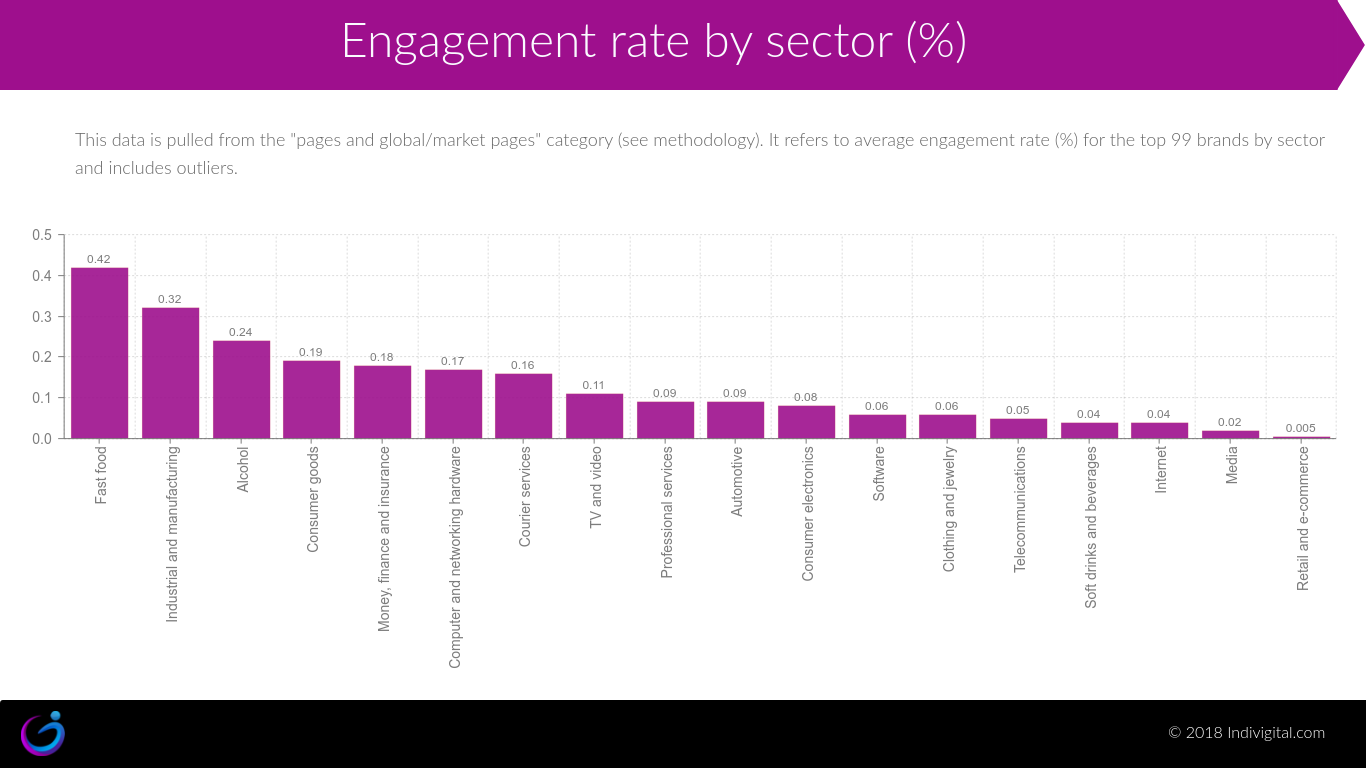 Of the top 100 brands, only Amazon, eBay and Ikea were placed in our “retail and e-commerce” category, largely because the number of clothing and jewelry brands in the top 100 necessitated a separate category.

The average engagement rate for the clothing and jewelry category is 0.06 percent (“fast food” is the top performer overall, accounting for an engagement rate of 0.42 percent).

What are some of the other key findings from our research?

To retrieve accurate engagement rate totals, we had to adjust page like totals for brands which had implemented Facebook’s global page likes feature.

We did this by selecting a single, representative market page for each brand which implemented global pages. We then analyzed the number of post likes from the target audience to this page.

Outliers were identified by analyzing total post shares as a percentage of total post likes for data which lived three standard deviations beyond the mean. You can read more about the methodology here.

Is social media still worth it?

In a word: yes (I firmly believe, in the right context, all marketing tactics are “worth it”). However, marketers need to take note of a few things:

By all means leverage social media as part of your marketing mix, however it’s more important than ever to see beyond the big outliers and consider the type of person who frequents social media.

About the Author: Jason is co-founder of Indivigital, a tech and marketing news and product reviews website. His content has been syndicated to, published on, or linked to from, a range of websites including SEMrush, Yahoo, MediaPost and Smart Insights. You can follow him on Twitter here.