Every mobile app startup wants to focus on design. I get that – UX is sexy, it’s tangible, and yes, it’s critically important to the success of your app. But if you care about real ROI from your mobile app, UX is only half the battle.

Marketing is just as important to the success of a mobile app as UX. Without an effective marketing campaign, even a well-designed, functional mobile app can languish in the depths of the App Store.

As of last year, there were more than 2.2 million apps available on the App Store – and with the sheer amount of time and money it takes to make an app, the only way to protect your investment is through an effective growth marketing campaign. 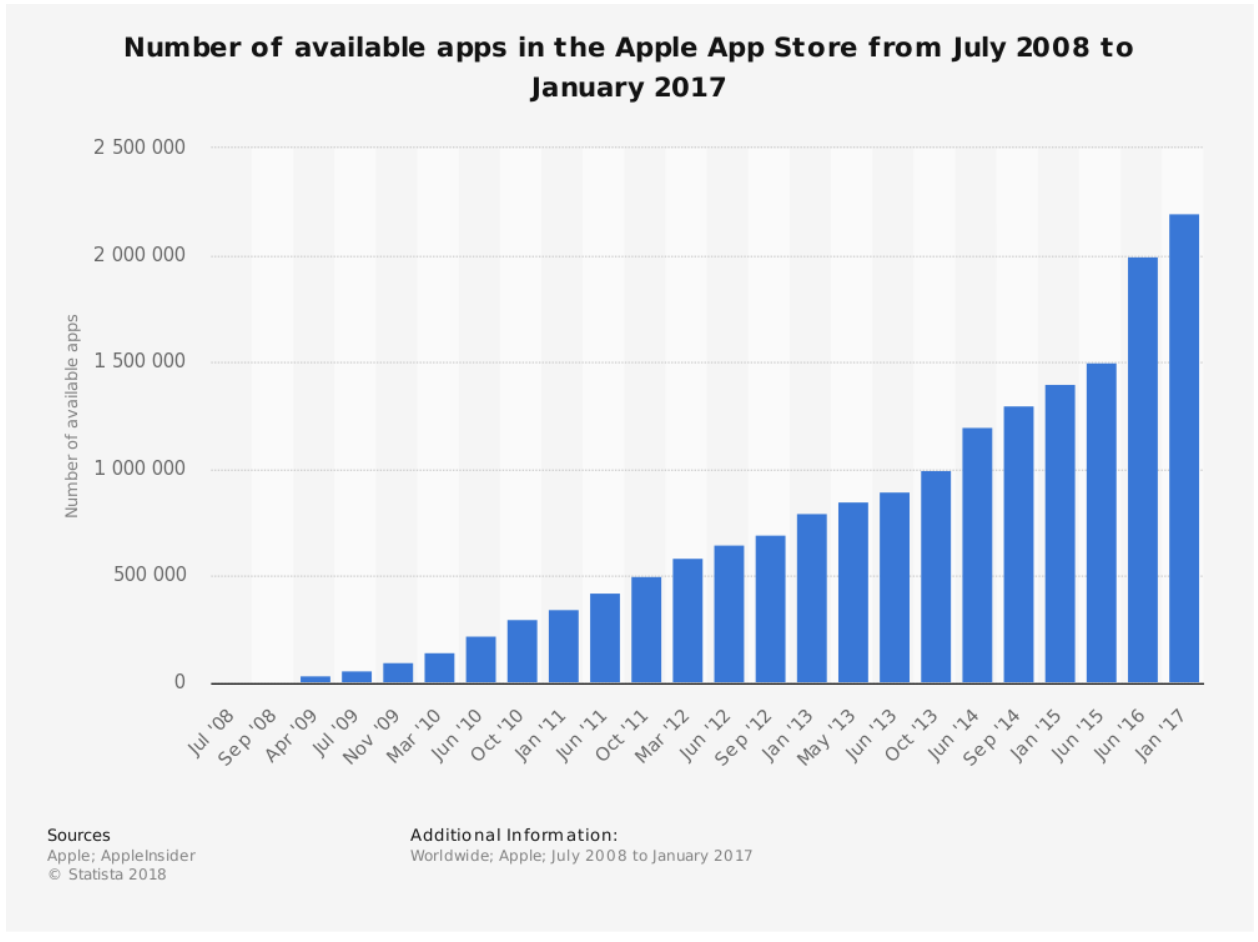 As the head of a development agency, I’ve helped launch more than 500 successful digital products. Here are 6 bleeding-edge growth hacking techniques for building your mobile app user base that still works in 2018.

Use Deep Linking to Increase Conversion Rates by 18%

When advertising a mobile app, the middle of the funnel is usually the hardest part.

For a website like an ecommerce store, PPC ads work well because the funnel is relatively short: once a user clicks on an ad, they’re taken directly to the product page and can checkout immediately.

For apps, though, the process is more complicated: users have to not only download the app, but complete even more steps to access the content or perform the action they want within the app itself. These added steps reduce the conversion rate, which can make PPC advertising ineffective for mobile apps.

However, companies like Branch have created technology that solves this. Branch’s technology creates a link that goes directly to a screen within a mobile app. If the user doesn’t have the app, the link goes to the app store and straight to the target screen after the user downloads the app. If the user does have the app, the deep link bypasses the app store entirely and heads straight to the target content.

HotelTonight used deep linking on a Google Adwords campaign that resulted in an 18% boost to their booking conversion rate. Note that this isn’t just a boost in installs – these are booking conversions, which means a direct boost in revenue. Deep linking like this is effective because it dramatically reduces the number of steps between a user and the target action, and it’s an incredibly powerful growth hack for mobile app marketing.

Launch on Android First to Reduce CPI by 60%

At my agency, our general policy for internal products is to launch on Android first.

Why? Because Android is the perfect testing ground for v1.0 of your app.

We’ve found that Android user acquisition, in terms of cost per install (CPI), is upwards of 60% cheaper than it is on iOS. 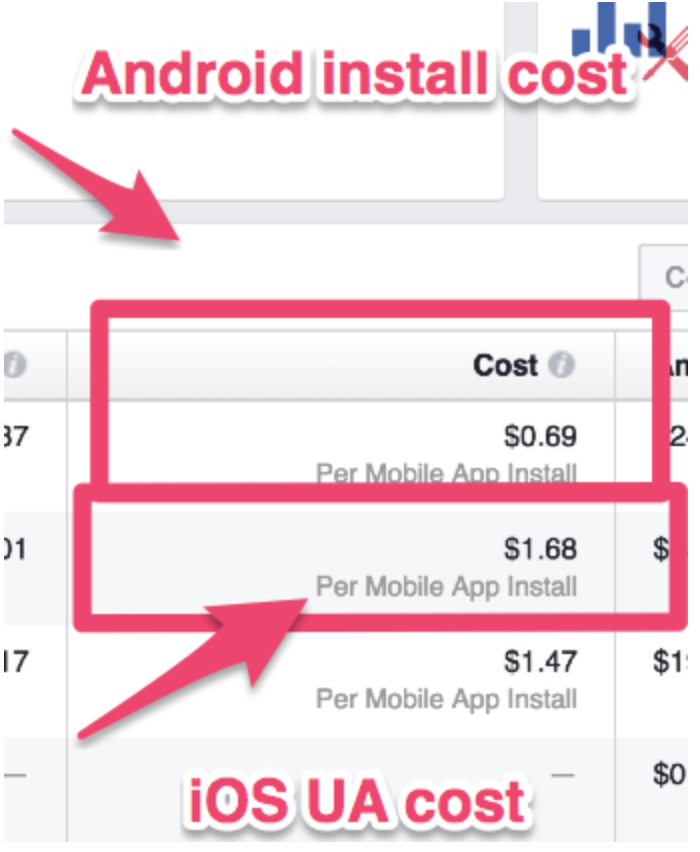 That means it’s much easier and cheaper to acquire your first users on Android. Furthermore, the Google Play store allows you to publish changes to your app in a matter of hours, whereas the App Store has a wait period of a few days.

This means that on Android, you can quickly and cheaply acquire users, then run tests and gather data from those users about the design of your app. Because you can publish changes quickly, you can use that data immediately to fix bugs and improve the app by launching new iterations. After you’ve fixed the obvious issues and iterated your app to be more user-friendly, you can launch on iOS and start your user acquisition campaign in earnest.

Use Chatbots to Achieve Sky-High CTR

Chatbots are still one of the most effective marketing tools on the internet, especially when combined with a high-adoption platform like Facebook Messenger. When you combine chatbots with traditional Facebook PPC ads, you can supercharge your results.

Try running Facebook ads with a CTA to comment on the ad, then use a messenger bot (Chatfuel works well) to follow up with everyone who comments on the ad. One simple strategy would be to ask a simple question like “What’s this landmark called?” in the ad, expecting that everyone knows the answer. For best results, try to make the question related to your ad.

Have Chatfuel follow up with users and include a CTA to download your app. You could even combine strategies by including a deep link in your chatbot response – this will help shorten the funnel and improve conversions.

For my own personal content, I’ve found that chatbots are one of the highest-converting marketing channels around. Some of my campaigns have achieved CTRs up to 85%: 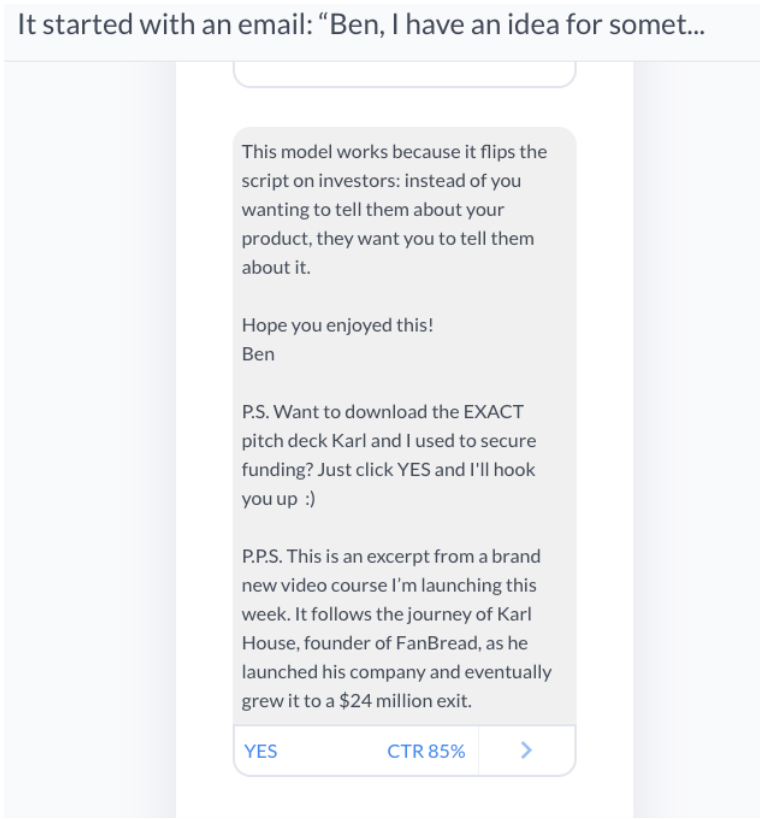 Don’t Use a Green CTA Button

Since the dawn of internet marketing, green seems to have been the go-to color for CTA buttons. After all, green means go, right?

But an exhaustive study by Hubspot shows that this trend is misguided. Their testing showed that a red CTA button performed better than green by 21%, upending the conventional wisdom.

They’re quick to caution that these results can’t be generalized to every application. But the biggest takeaway here is that your CTA button should stand out – what’s most important is to use a color that isn’t found in other elements of the page. For example, if your page design features a lot of blues and cool colors, a red CTA button would work well. But if your design is full of orange and burnt umber, you might do better with a green button after all.

Even with growth hacking, traditional paid marketing is always going to generate low conversion rates because consumers don’t trust advertisements anymore. In fact, with the proliferation of ad blockers, many consumers don’t even see ads anymore.

Capital and Growth explains that “influencer marketing works because on a base level, consumers trust influencers. Even if a consumer is skeptical of advertisements, many trust the influencers they follow, so an endorsement from an influencer is a powerful way to drive new users and conversions to your app.”

Use Snapchat Geofilters to Get 10 Million Views for $20

We all know the four P’s of marketing: product, pricing, promotion, and placement. Many of us only think about the internet for promoting and advertising products, but sometimes physical advertising is even more effective because everything else is online. Unfortunately, billboards cost thousands of dollars – but Snapchat geofilters let you advertise anywhere, in real time, for the cost of a sandwich.

Chris Hall did this flawlessly to promote Kickster, his sneaker app. Hall created a custom geofilter to target a DJ Khaled pop-up event. The filter focused on Khaled and his We The Best brand, including Kickster only as a small part of the screen. It also featured catch-phrases that Khaled uses on a regular basis, such as “major key.” And it worked like a mousetrap.

Khaled himself loved the filter and started using it on his snap story. This led to the filter, and the Kickster brand, being viewed 10.5 million times, generating thousands of downloads of the Kickster app. And how much did Hall spend for all those views and downloads?

There’s nothing to stop you from doing the same thing for your mobile app. Using Snapchat’s public geofilter interface, you can create custom geofilters and lenses targeted to celebrity events or other relevant locations – cheaply, on-demand, and virtually anywhere in the world.

Each of these growth hacks could help you explode your mobile app growth, but ultimately, what’s effective depends on the specifics of your mobile app. That’s why it’s important to remember that no matter what technique you end up using, the fundamental law of all growth hacking still applies: test.

By all means, use each of these hacks. But set up tests and measure your results. Once you find the hack or the marketing channel that works for your app, double down and watch your installs skyrocket.