How to Use Influencer Marketing to Boost Your Traffic and Conversions 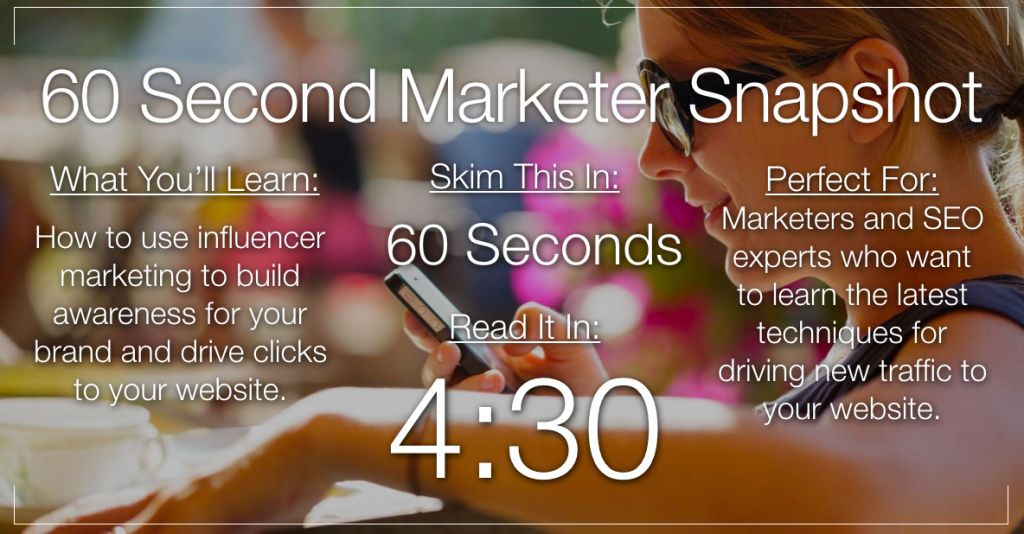 Getting an influencer to promote your product is like having a thousand friends whisper in all their friends’ ears how wonderful your product is. That can make a big difference to your marketing and sales. Statistics show that 82% of us trust recommendations from people we know. And we think we know influencers. After all, they’re the people we follow on social media and whose opinions we specifically seek out, right?

The fact that you are reading this article, however, shows that at least to an extent you already knew that. The question you want answered is, “So how do I cash in on these influencers?” It’s an important one. Let’s take a gander at answering it, shall we?

Know who influences your audience

Step one is to know which influencers matter to you and to do that you need to figure out where your audience goes to get the information they want. Who do they listen to? Whose opinions matter? Why do they listen to them?

Know what kind of influence you want

TIP: You can get a lot of ideas simply from looking at which influencers your competition is interacting with – that is who they think influences their market segment. Are they right? Is that your segment as well? Are they missing out on any names that they really should have included? This information will be immensely helpful in knowing who to target.

The first thing that you’ve got to make certain of is that you’re on their radar (and to let them know you’re on theirs). This can be as simple as commenting on good content they’re producing or sharing what they’re doing with your own network. We all like it when people and businesses show an interest in what we do.

This is, however, not enough. We do not want to end up in the fan boy category. The next step (better yet, the step you’ve already taken) step is to make certain that we’re actually adding to the industry’s conversation. This can be through high quality and sharable content creation, talking with thought leaders in the same circles and sharing opinions on shared platforms.

From there you can then start engaging with them personally. Here the ambition is to engage in both an exchange of ideas as well as an exchange of content across your platforms. This can mean you guest blog for them and suggest that they do the same for you. When they do contribute, boost their content. Really blast what they’ve got to say across your newsletters and social media. The reason for this is plain – if they see how much traffic feeds back to them from your site, they’ll be far more inclined to write for you again.

And then through several psychological mechanisms – like the norm of reciprocity, the mere-exposure effect and reduction of cognitive dissonance – they will find themselves ever more positively inclined towards your product.

Be an additive force

The thing is, this will only work with a few influencers, which is a great start. It isn’t enough, however. You want to reach many. You are now in a perfect position to do so. What you’ve got to do is use these influencers you’ve got on your team and leverage them into a more wide-spread awareness across the market.

To do that you’ve got to focus on high-quality content creation and to use well known and less known content marketing strategies to push it out there – not just with your content but with their content as well. Become a source of inspiration and a conversation starter in the market. With that I mean ask questions and engage with the questions of other parties. Don’t just generate factual content, but also generate emotional content that influencers and follows alike can appreciate and share. Create opportunities for people to create content of their own for your company and with your company, such as photos using your products or other user-generated content.

These influencers that you’ve managed to bring on board will gladly help spread this message, as they too are always on the hunt for new content and you’re now making it easier for them to create some.

And when they, or new influencers, do engage with your content, make certain that you push their posts, pictures, books and blogs, whether they relate to you or not. They will become more meaningful influencers and most will certainly not forget to reciprocate, which is the social currency of the online market place.

Along with boosting them and thanking them publicly for what they’re doing, consider paying them. And with this we don’t mean that you pay them for promoting your brand on their site or across social media. That can be very dangerous, as it risk replacing intrinsic motivation with extrinsic motivation and thereby killing the soul in their efforts, something fans will quickly realize (they somehow can sniff paid advertising a mile away). Instead, consider paying people for providing you with high-quality content for your site. This avoids making them feel like they’re paid advertisers, while still – in effect – allow you to buy their loyalty.

So when you’ve got a good idea for content that you’d like to have for your site, approach an influencer that you think could do a good job for it and ask if they’d be able to write it up for a fee. If they say ‘no’ then no harm has been done. They’ll feel flattered for having been asked and you did not offer them money for promoting your brand and thereby did no create a conflict of interest.

If they say ‘yes’, then you get high quality content, while they will become much more motivated to talk about you in a positive light as there is some financial incentive, namely the opportunity for more work in the future, to do so. And that for a few hundred dollars. Not a bad investment, right?

Experiment and track the numbers

Try out different strategies. Engage with different types of influencers. Try pushing social media for one or two months, then try seeing what leaning more towards business insiders will do. And above all, watch the numbers. How do different influencers affect your fan-base, your content engagement, your conversions and your content creation?

If you carefully track all this information (and more) and continue experimenting correctly, though it might cost you a little bit in the short run as you perhaps try sub-optimal strategies, in the long run it will pay huge dividends. This is because your online presence grows cumulatively. The more people that engage with your content, the more potential there is for additional people to find out and engage with your content as well.

So – just like with compound interest – even just boosting your engagement by 1% per month will lead to cumulative growth that will have you double your engagement over the less effective strategy in a matter of a few years. Now that sounds like something you’d like to do, doesn’t it?

About the Author: Rick Riddle is a successful blogger whose articles aim to help readers with content management, self-development and entrepreneurship. Connect with Rick on Twitter and LinkedIn.