Social Media Etiquette for Business: 10 Simple Tips You Should Follow 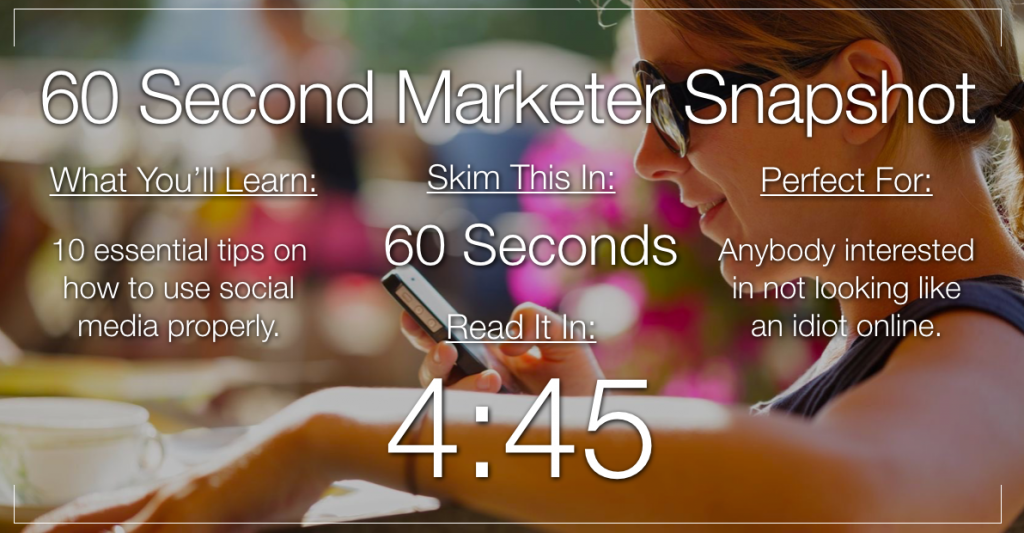 If you think etiquette is dead, you’re wrong. It’s just changed and moved online. Fundamentally, however, it’s still the same because it’s about being socially responsible, observing the norms and values of the community and doing what is expected of you.

Do that and you’ll be in a good position to reap the social dividends as you form relationships, enhance your reputation and boost your exposure.

Ignore the social niceties, on the other hand, and at best you’ll be ignored. And at worst? You’ll be ridiculed, flamed and ostracized. And that can’t be the point of having a business, can it?

So what are the new rules of etiquette? Read on, dear reader, read on! 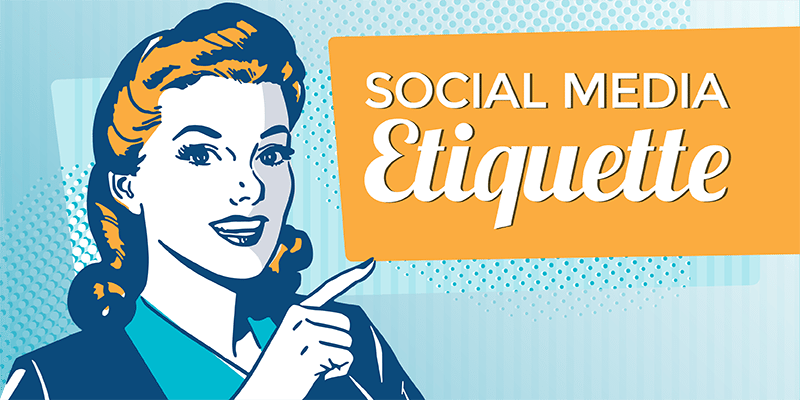 Fill out your details

Just like people don’t appreciate it if you wear a hat anywhere and everywhere, so the online community wants to see your ‘eyes.’ For that reason, make certain that you fill in your profile completely and that you use your name and a photo of yourself.

I hopefully don’t have to explain the why of it, but I will anyway (I enjoy making a point). It’s because the internet is full with fly-by-night operations and people want to know that you’re not one!

You don’t poop where you eat, and you don’t have sex where you sign documents. The same applies online. Keep one account for your personal life and another one for your work. This will make it easier for people to know who they’re dealing with (is it the business you or the fun you?) and also makes it far easier to appear professional. And that is ultimately going to help your business and your bottom line.

Of course, that doesn’t mean there can’t be any overlap between the two. There are plenty of people who are both business contacts and people you’ll have a drink with. Instead, the point is that you do not advertise your social connections on your website and vice versa. In the former case it’s considered improper, in the latter case it’s seen as prideful.

You know how it’s really annoying if somebody comes up to you in the street and tries to make you buy something? Well, that isn’t just true on the street. On the internet it’s just as frowned upon. What’s more, it’s even less effective as we don’t feel obliged to be half as nice to you online as we are in person.

Don't befriend people online just to sell them stuff. It's annoying and it only makes you look stupid.Click To Tweet

For that reason don’t just hit people up on social media and then try to sell them your product. When you do that you’re like a beggar who follows somebody for three streets begging for change. I had that happen once. She wouldn’t give up. It is not cool.

Just don’t do it. If you do, you’re like that one friend you’ve got who keeps inviting you to play all those stupid games they somehow find the time to play. It is not going to make you seem likable. In fact, it’s probably going to end up getting you blocked.

Of course, that doesn’t mean you can’t send any invitations at all. Just make certain that you know when you last sent somebody an invite and if they don’t respond, then wait at least a few months before you hit them up again.

Note that this does not hold if they opted into receiving notifications from you, like a newsletter. That’s a different matter. If they don’t want to receive your invitations in that case then they’ve got to take action. That’s not on you.

You know when you’re at a party and you get stuck with that person who just won’t shut up? That person exists online too. You don’t want your company to be that person. Fortunately, people find it far easier to ignore people that constantly post online, but there is still an upper limit – and that limit is far more quickly reached if what you’re posting isn’t interesting.

So make sure the stuff you’re doing on social media matters to people. If they’re not reacting, then it probably doesn’t matter to them. So try a different tactic.

It isn’t that hard nowadays to get your spelling and your grammar checked. Heck, Grammarly will do it right there in your browser and it’s free! So there really isn’t any kind of excuse for you to not use them. It really only takes a few minutes and makes your text so much more readable.

And since you’re not a teenager anymore and you can’t blame your hormones for being a self-centered lazy little twerp. So there is that.

Don’t post when you’re exhausted, emotional or under the influence

You know those videos of people saying nasty things about their bosses when they’re right behind them? That’s so much more likely to happen on the internet.

What’s more, even slightly ill-considered statements can cause a world of pain and insults since the written word has so many fewer channels of communication than when you’re speaking (as in, the spoken word also has tone and speed, the written word doesn’t).

So if you’re not feeling well rested or completely sober, it’s possibly better to hit save rather than publish. If it really is genius then it will still be great tomorrow morning. And if it wasn’t so well thought out, then you can still discretely delete it before there’s egg all over your face.

When somebody doesn’t want to be connected, don’t double down but back off

If you get into a shouting match with somebody because they don’t want to connect with you, then you’ve entered a no win situation. There simply is no way for you to get out of that situation without looking like a complete fool.

So the best thing you can do is to simply not get into these kinds of situations to begin with. When somebody does not accept your overtures to connect then do the smart thing and look elsewhere. The internet is a big place – thousands of times bigger than your home town, for example. And so you’re going to find somebody else who will want to connect. Better to spend your energy looking for them, don’t you think?

Don’t be guilty by association

Be careful about who you connect to. Don’t accept just anybody, but at least do a preliminary and quick check to find out who they are.

This isn’t because there are a lot of nutcases out there. Most people are harmless. Rather, it’s because one nut case can do a lot of harm. And that’s what you’re looking to avoid – doubly so if you allow your visitors to comment, discuss and contribute on your site. And let’s face it, most of us do that nowadays.

If somebody spouts racism, sexism or any of the other ‘isms’ that people don’t like, you and your company might very well get caught up in the poo storm that results. Similarly, if they plagiarize other people’s work, then you’ll also be guilty by association, which will tarnished your brand as well. You can prevent plagiarism and avoid sexism and racism simply by looking who you’re dealing with.

If somebody has something negative to say about your site, however inaccurate that may be, don’t tell them they’re wrong. Opinions are just that. They are neither right nor wrong, they are just what people think. Everybody is entitled to their opinion. Telling them they’re not is just throwing fuel on the fire.

So, accept their criticism gracefully, tell them that you respect their opinions and that you’ll take it under consideration and then move on. That is almost always the best approach.

And finally, if somebody tries to engage with you, take the time to respond! They are going out of their way to let you know something – and even if it doesn’t interest you, it’s still nice to say that you appreciate them sharing it with you. This goes double if they tell you something in public, as then it isn’t just the opinion of the person you’re talking to that will be influenced, but everybody else who reads the comment as well.

And they, just like the passerby on the street, will judge you. So make sure you’re judged in the best light possible.

About the Author: Elaina Meiser is a graduate student and an enthusiastic blogger who is interested in writing about everything worth reading in the digital marketing sphere. She also loves creative arts, different tips & tricks guides for students, excursion and backpacking trips. You can follow her on Twitter @ElainaMeiser.