Cyberattacks are no Longer Just an IT Matter: Why Cybersecurity Matters to Marketers 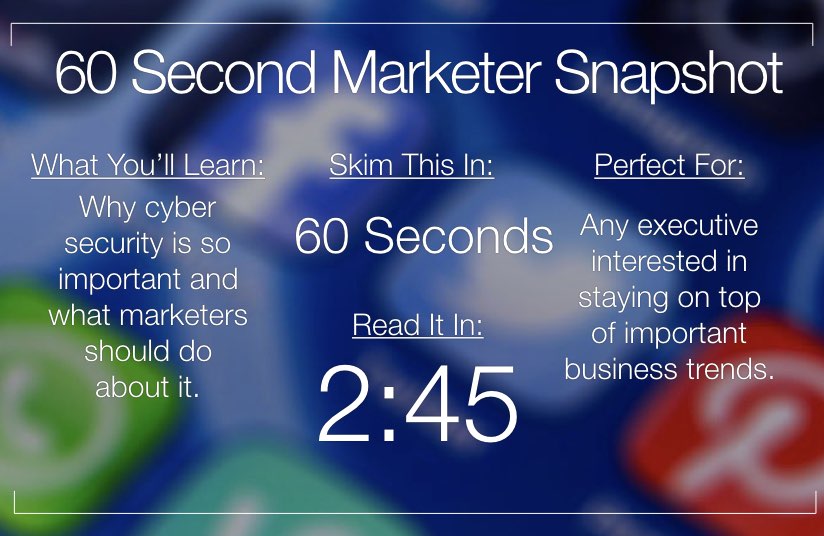 A wave of cyber-attacks have swept across Europe and the world lately, and an unfortunately large number of them targeted businesses. The WannaCry and Petya attacks that devastated the world in the past year were just the tip of the iceberg; more and more companies suffer from security incidents that see sensitive information compromised – which is why cybersecurity should feature highly on the list of every successful marketer.

One of the reasons cybersecurity is important to marketing is the sheer amount of customers that could be affected by a single incident: when cybercriminals strike, their victims are rarely few.

Some of the biggest data breaches include the 2013 attack on Target, which led to cybercriminals stealing the credit and debit card information of roughly 40 million customers.

The two data breaches revealed by Yahoo less than a year ago that saw 500 million and more than 1 billion accounts compromised, respectively.

And the data breach at Equifax this September that saw the personal data of 143 million Americans – nearly half of the population – fall into the wrong hands.

This translates to revenue and funds being directed to mitigate the consequences of the breach, instead of investing in growth opportunities for your company.

According to the same source, Yahoo suffered a cut of roughly $350 million in its deal with Verizon to buy the company. Target had to pay $10 million directly to its customers who saw sensitive data affected and further damages in the tens of millions to US banks who were forced to reimburse customers due to the data breach. In fact, according to Cybersecurity Ventures, cybercrime damages are projected to rise to $6 trillion by 2021, while 60% of small companies report going out of business within six months after suffering a cyber attack.

Marketers Should Focus on Damage to Their Reputations

And it is not just the industry giants that are targeted, as cybercriminals widen their scope: according to the same source, 43% of cyber attacks are directed against small businesses and, from May 2015 to May 2016, half of small business respondents reported data breach incidents that affected customer and employee information.

Losing money directly is just one aspect of how targeted companies suffer: damage to reputations and brand image is often even more disastrous – and very hard to repair.

A report conducted by OnePoll and published on CSOonline.com last January revealed that roughly  2,000 consumers surveyed were not going to (or “not very likely to”) do business with an enterprise that had suffered a security incident affecting credit or debit card credentials – although the numbers were slightly lower for compromise of home address, telephone, and email details.

Advertising that your company is investing in a sound cybersecurity strategy is the first step to a good marketing approach that responds to consumer concerns; for example, security solutions like a WAF  (Web Application Firewall) can help prevent security breaches.

A WAF filters all incoming traffic and weeds out potentially malicious visitors and threats, and it also can allow enterprises to comply with PCI-DSS certifications that are required for all services processing credit card information. Including this sort of crucial security information in your marketing strategy can play really well with a customer base that is surrounded by reports of personal data breaches.

Even though cybersecurity is not one of the themes marketers traditionally pay attention to, recent cyber attacks – and their crippling effects – suggest that consumers may value security as one of the determining factors for choosing a provider. Not forgetting to highlight how your company deals with security issues will positively impact your marketing campaign.