Why and How to Get Started with Social Media Videos 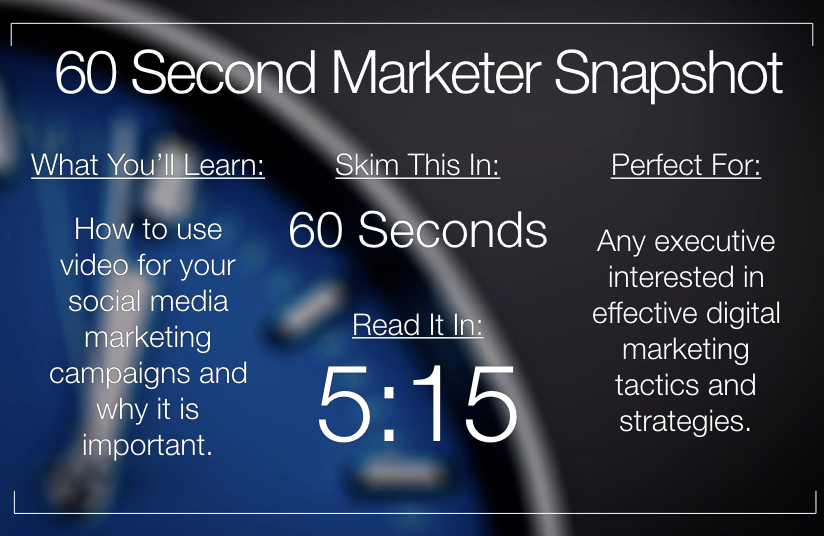 Using video as part of your marketing efforts is a no-brainer. And if you’ve already implemented video on your website and in your marketing emails, there’s no reason not to make it a linchpin of your social media strategy.

From user-generated videos to live broadcasts and Q&A videos, there are many ways to capture the attention of your followers, whether it’s on Facebook, Twitter, Instagram or some other channel. Posting slick, creative video content also generates fresh opportunities to bag new followers and thus broaden your reach: the ultimate objective of any sustained social campaign.

The advantages of creating social video are ably borne out by the statistics. The next time you’re debating whether to start using video, bear these nuggets in mind:

It has become something of a cliché, but attention spans are steadily declining in our increasingly frenzied technological age. Indeed, according to a Canadian study published a few years ago, the average human attention span has dropped from 12 seconds in the year 2000 to eight seconds – a 25% slide.

In light of this fact, video advertising – on social media especially – begins to resemble a necessity rather than a luxury. Ignoring this reality is downright injurious to the health of your business.

So you’ve taken the decision to incorporate video on your social platforms. Great! Now there’s just the small matter of pioneering highly engaging, highly shareable content that reinforces your brand messaging and promotes that all-important feel good factor. Easier said than done but by no means impossible.

There isn’t really a uniform process to video creation, but it’s logical to do things chronologically: start by brainstorming video ideas and making a list of topics you want to cover, products you wish to showcase and formats that interest you (interview, presentation, animation, Q&A etc.).

You might derive inspiration from well-performing blog posts, popular telephone or email queries, seasonal opportunities or a piece of inspiring content you’ve viewed online. You needn’t have to do all this yourself either: a tool like Buzzsumo can help you identify content that resonates with your customers, as well as optimize your video marketing to promote engagement.

After your brainstorming session, it’s time to storyboard or draft a script – after all, your video won’t go viral if it starts with you gaping awkwardly at the lens. Actually it might, but not for the reasons you’re hoping! Once your script is polished and good to go, it’s time to record. Creating good-quality footage is a cinch thanks to smartphones, and you can augment the process with a video-editing app like iMovie. To achieve that coveted professional feel, consider setting up your device on a tripod and, as a final touch, using a microphone to ensure smooth audio.

Admittedly, the process of filming and editing can be a little daunting for newbies. Which brings us nicely on to…

The internet has richly endowed us with a selection of high-quality content creation tools, including video creation. We can’t all win an Oscar, but by brushing up our skills on such programs, we can at least create a nice piece of footage. Below, here are some of the best tools that can help you create videos for social media:

wave.video is a sophisticated yet easy-to-use video maker which will let you get your content uploaded in no time. Not only does it enable you to craft marketing and social videos in a matter of minutes, but you can instantly resize clips to 30+ popular formats, meaning you can replicate output across various social platforms: square videos for Facebook, vertical vids for Instagram Stories, etc.:

As a bonus, you’re also granted unlimited access to 200 million stock videos (with voiceover capability) and a collection of eye-catching designer templates. The simplicity of the software is pretty tough to beat, so it’s worth checking out the free trial; $39.00 per user month is the price thereafter.

Biteable is another first-rate video creation tool, used by four million marketers – including tech giants IBM and Microsoft. It might boast less stock videos than the aforementioned wave (85,000 vs. 200 million) but it excels with an array of beautiful templates, from explainer videos and Black Friday promotions to motion graphics and thank you notes.

There’s also a huge library of license-free audio clips to utilize, meaning you can add a soaring score to your inspirational video. In common with wave, Biteable entice you to sign up by offering a free version, which comes with 1gb of storage and the option to shoot five videos per month. The fully paid-up subscription, meanwhile, costs $23/month (billed as $276/year) and gives you carte blanche.

Notable for its simple drag-and-drop interface, this cloud-based tool is a great option for complete beginners, who can combine clips, photos and pre-built storyboards to craft a powerful video. The power is entirely in your hands: play director by determining the pacing, layout and design, experiment with voiceover and choose music to accompany footage from a library of 2,000 songs.

The end product, meanwhile, can be uploaded directly from Animoto to social platforms such as Facebook, YouTube and Instagram. Interested? You can try Animoto free for 14 days; paid packages start at £7.99/month, billed as £95.88/year.

There are several types of videos you can create as a business or marketer, so it pays to do your research in order to serve viewers the content they expect. It’s also wise to drill down into your analytics to determine the demographics of your followers, as this will undoubtedly inform the tone of your productions.

As far as best practices are concerned, you must factor mobile into your considerations: it’s no secret that more of us are watching content on our handheld devices, and as we scroll our social feeds, videos must capture our attention within a few seconds. Given that over 85% of social videos are played with the sound muted, you should also aim to create a visual story – or at the very least, add subtitles. Remember, too, to create a mixture of short and longer clips, paying heed to which length works best on which platform.

Whether you’re a social media manager, entrepreneur, digital marketer or start-up, you could greatly benefit from upping your video game. Creating memorable social videos is anything but easy, but by following best practice and deploying a little creativity, you can evoke emotion and elicit a positive response.

About the Author: Highly regarded on the world speaker circuit, Lilach has graced Forbes and Number 10 Downing Street. She’s a hugely connected and highly influential entrepreneur. She is listed in Forbes as one of the top 20 women social media power influencers, named one of 10 top digital marketers by Brand24 and was crowned the Social Influencer of Europe by Oracle. She is listed as the number one Influencer in the UK by Career Experts and is a recipient for a Global Women Champions Award for her outstanding contribution and leadership in business.