How to Build a Powerful Corporate or Personal Brand 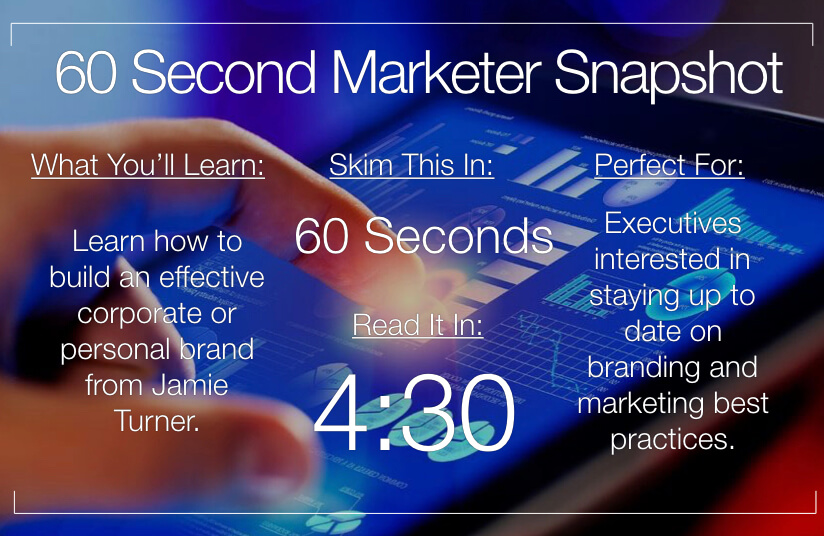 Do you want to build a powerful brand? If so, then it might help to understand exactly what a brand is. After all, there’s a difference between a brand, a value proposition, a positioning statement, and a message.

There’s also a difference between a corporate brand and a personal brand.

In this episode of IN:60, we explore what makes brands like Coca-Cola so powerful and valuable. We also explore the distinction between a corporate brand and a personal brand.

Ready to learn more? If so, just click the video below.

That my friends is the Coca-Cola World Headquarters. Decisions are made there and ideas hatch, that impact one of the most valuable brands on the planet. My name is Jamie Turner and this is In 60, where in 60 seconds I talk to you about things that you can do to improve your career or grow your sales and revenues. Let’s talk a little bit about Coca-Cola and Pepsi, and how you can use some of the learnings from those brands in order to improve your business.

Here’s a story for you. Many years ago at Baylor University they did a study where they went in and gave 100 people a blind taste test where they were drinking Coke and Pepsi. A blind taste test means they didn’t know which brand they were drinking. What do you think happened? Do you think people liked the Coke or Pepsi better? The truth is, it came out about 50/50. Half the room like Coca-Cola, half the room liked Pepsi. Then they went into the same group of people and gave them a non-blind test. This is a Coca-Cola bottle, and this is a Pepsi bottle check it out, tell us which one you like better. 75% of the people chose Coca-Cola. Wait a minute, we know that 50/50 was the result in the blind study, why would it be any different for the non-blind study? Here’s why.

Now, let’s take a deeper dive into the subject so we can learn a little bit more about branding, and how you can use it to impact your sales and revenues. Let’s head into the office.

Hey, we’re back, and I know said we’d be inside the office, but hey, check it out. Look how beautiful this is, it’s a beautiful spring day, why would I spent my time in the office when I can talk to you from outside? First thing’s first, I want to thank Agorapulse for sponsoring this episode. Agorapulse has been a terrific partner of ours. Be sure to check out agorapulse.com. They do wonderful things for social media management, if you’re looking for better ways to do your social media, check out Agorapulse.

Now, let’s shift gears entirely, and talk about a personal brand. How does that differ from a corporate brand? A personal brand is very, very important. If you’re an entrepreneur, if you’re working in corporate American, if you’re a real estate agent, a dentist, it doesn’t matter. You have a personal brand that you need to bring to the table. So here are three, count them, three tips that I’m going to give you on how to make sure you have a terrific personal brand.

Tip number one, humility can be your most powerful ally. Humility is a secret weapon that people in personal branding know, because we live in a world where the people who get on the cover of magazines are not humble, but the people who are the power brokers behind the scenes are humble and deliver the good. So keep that in mind, don’t listen to our culture that says, “Be bragging.” Listen to your heart and be humble, and do the hard work.

Final thing, is something that’s really important and it seems obvious, but if you practice this, it’s really terrific. Be your authentic self. Now I have a friend named Mari Smith, who is her authentic self in everything she does. She talks about Facebook and delivers the goods. She does her homework, she has great content, but she also has this kind of charming, uniqueness that’s a little bit different, and a little bit off center. And that’s what is appealing to her. Because she’s kind of the quirky lovable half Scottish, half Canadian, half American, I don’t even know anymore. But she has this sort of magnetism that she brings people in on, because she’s being her authentic self. She’s not trying to be somebody else. So remember, try to be your authentic self in everything you do. And by the way, check marismith.com, she’s got a terrific website and some terrific information about Facebook.

Now we’ve covered a lot of ground here. I want to do a quick recap, we talked about Coca-Cola, we talked about Pepsi, we then talked about Starbucks, and how it’s the experience that matters. We then talked about your personal brand. Make sure you use the power of humility, make sure that you surround yourself with five people who are awesome people, and then make sure that you’re your authentic self. If you do that, then you’re going to be in great shape. That’s it for today folks, if you like what you saw, be sure to leave a comment down below. Give us a thumbs up, and hit the subscribe button because there will be more episodes like this coming down the pipe.

Once again, we’d like to thank Agorapulse for everything that they’ve done. My name is Jamie Turner, this has been IN:60, and I’ll catch you next time.