What Marketers Can Learn From Brands Making Political Statements 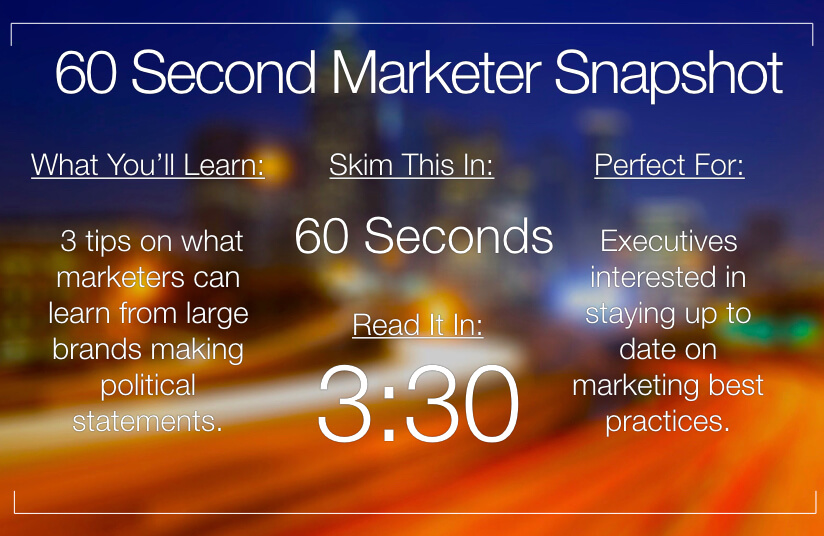 Brands like Walmart, CVS and Wayfair made headlines this summer for making political statements ranging from gun control to immigration. Customers of each company reacted via social media to the news in a flurry of emotions — both positive and negative.

It’s important for brand marketers to understand their audience, predict their reaction and to expect some form of backlash when making such statements, because, let’s face it, you can’t please everyone. It’s about analyzing your audience and anticipating their viewpoints

In the case of Patagonia, the company has turned this into a big part of their marketing strategy. Every time the company has released a politically fueled statement, announcement or campaign over the past three years, it’s consistently received a positive response on social media from core consumers. Specifically, their $10 million tax cut to fight climate change and protest the elimination of protected land was celebrated by self-described, “Outdoor Enthusiasts.”

Not all brands have experienced the same positive reactions though. Let’s take a look at the three considerations for brands on whether to insert themselves into a politically-driven conversation.

Knowing your audience and consumer base is perhaps the most important consideration for brands before diving into politically-inflamed conversations. Does your viewpoint align with your consumers?

For Patagonia, its fight against climate change endeared the brand among its core consumer base because they knew the brand was environmentally driven.

CVS, on the other hand, had to dodge boycott threats when the public learned of its political lean and fight with Pill Club, a birth-control delivery startup. Not aligning with their consumer base on these issues resulted in a 1,788 percent spike in social conversation about CVS in one day. Of which, 96 percent of conversation was negative and, furthermore, 7 percent specifically mentioned a consumer’s new go-to pharmacy.

If CVS had garnered consumer analysis on political preference, they may have gone a different route, completely bypassing this debacle. Customer insights and personas can be inferred through social analysis, directing when and how a brand should insert their voice into a discussion.

With a solid understanding of your audience, you can likely accurately predict their reactions based on what type of statement you’re making.

When it was revealed that the chairman of the parent company of Equinox and SoulCycle was hosting a fundraiser for Donald Trump, customers of the boutique fitness companies revolted.

In fact, we found that 84 percent of all reactions to the news trended negatively. While this wasn’t a brand taking a political stance directly, it does speak to the larger trend, showing companies should be prepared to face customer backlash for the political leanings of its internal leadership.

In this case, if the brands under this chairman had been prepared for the news to drop, they might have been able to predict customer reaction and proactively address it rather than having to reactively combat customer chatter.

While aligning with your target audience can prevent major boycotts and heavy backlash, if a brand takes a stance on a social issue or politically-infused topic, there will be some negative reaction.

In September Walmart announced the constraints it’s putting on ammunition sales and a request that customers not carry firearms inside stores.

While their decision falls more in line with some of the public’s opinion on gun restrictions and follows other brands taking similar action, less than half of all social conversation about the announcement was positive.

Mixed and negative reactions came from both liberals and conservatives, with many liberals citing the announcement as “only a start” and asking why it took Walmart so long to react. Gun advocate conversation stemmed from disapproval, driven by purchasing guns and ammunition at smaller businesses after the decision, and concern for shopper safety with no way to fight back against an active shooter.

By doing your best to understand your core audience, you can predict their political outlook and world view but every move your brand makes won’t please all customers. No matter how much your audience leans to one side of the fence, some will lean the opposite direction, either on a single issue or in overall outlook. So, don’t be surprised or get discouraged as interjecting may still yield positive results and benefit your brand.

While there’s no “one-size-fits-all” answer to whether or when a brand should insert their voice into political conversations, social media data and insights can point you in the right direction by understanding your core consumer base, predicting their reaction and expecting criticism from the other side of the discussion. Despite the potential of rustling up feathers, brands can benefit from taking a stance on a specific topic and build a more loyal customer base.

About the Author: Jen Handley is co-president and co-founder of Fizziology, where she works with film, TV, talent, and brand clients to help them understand audience reactions to marketing and products, and devise research-based strategies.