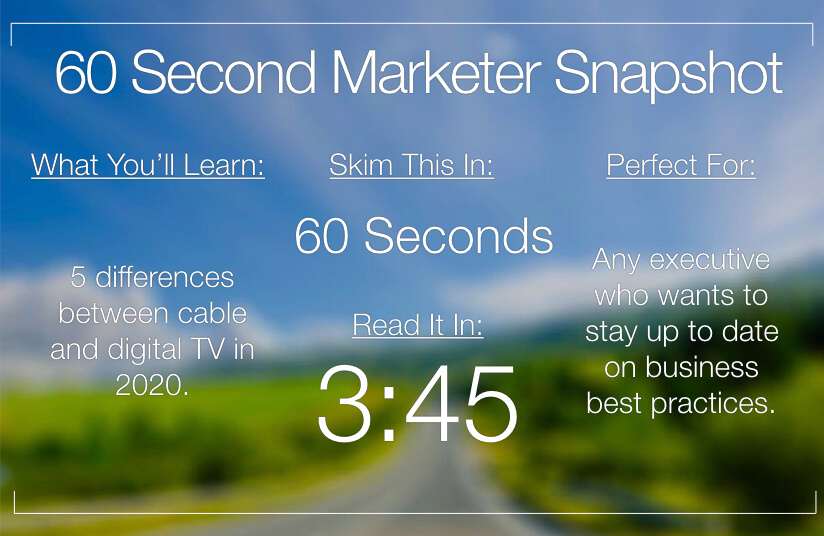 Long gone are the days of simple analog television sets, when things were simpler and easier to understand. Technological advancement gave birth to more innovative and cutting-edge siblings of analog television sets. The most confusing one was the contrast between cable and digital television. Being siblings, they had a lot in common but owing to the difference in the generation, there were many differences yet to be discovered.

Cable TV and Digital Satellite TV are two of the major competitors when it comes to offering quality entertainment. Cable companies such as AT&T, Comcast, Cox cable, U-Verse TV, etc. offer television services that are nothing short in quality from what other satellite TV providers have to offer. Analog television sets of old fashion didn’t support as many channels as satellite television service did, especially movie channels and the image quality was never appealing. However, the development of digital TV put a 180° shift to the situation. The newer development used a technology that used digital compressions to convey more refined and high-quality content. Here we explore the main differences between cable and satellite television, read on to find out more.

Satellite television is more omnipresent and is accessible both in rural and urban areas falling within the satellite footprint. Thus, residents who don’t live in large cities don’t have to worry that they might have to compromise on their entertainment possibilities, one of the reasons to make satellite TV a popular choice for a long time. Cable Television, on the other hand, is only available in towns, cities, or areas where the providers have taken the trouble of getting the wired web of cable network installed.

This is the world of digital satellite and digital cable TV with a never-ending list of channels. Satellite Television service has been known to deliver more content and a greater number of options as compared to Cable Television because of the bandwidth limitations that cable TV faces when it comes to infrastructure. However, this gap is thinning gradually since the cable providers are constantly updating their infrastructure to come at par with satellite TV.

Cable TV just like Satellite television requires a set-top box that has to be HD capable in order to decode the high definition signal received from the source. These set-top boxes often come free with installation, to be returned upon contract termination, but some providers do charge a nominal rental fee over them. Satellite Television service requires you to install a dish set up on your rooftop or sidewall in addition to the set-top box with uninterrupted exposure to the southern sky.

Satellite TV has a higher one-time cost as compared to a cable TV subscription unless you qualify for free equipment or installation offer in return for a yearlong commitment contract. The cable TV network, on the other hand, has a higher infrastructural maintenance cost which reflects in heavier monthly bills. In the longer run, satellite TV takes advantage here by offering more number of channels against each dollar spent.

Some satellite TV service providers ask for a mandatory subscription for at least 12 months in most cases. Most Cable companies, on the other hand, don’t have any such conditions of committing to a minimum subscription period.

So which one you must go for?

If the service offered by your current service provider is satisfactory and you haven’t faced any major issue so far then avoid the hassle of switching altogether.

Satellite television actually seems to have been leading, but not by much, in terms of innovation and picture quality.

When it comes to entertainment and the content, it’s all about what your personal tastes are. There really is no definite answer here as to which provider is suitable for you; until you call your satellite and cable television suppliers and ask questions regarding the current packages on sale.

As its no good having a never-ending list of channel line ups with only the ones that you want, missing. There are a lot of variables influencing the fact that which one is good for you but making the final decision depends on your understanding of what your entertainment needs are. I have done half of the homework for you and the reign is your from now on. Let me know in the comments below, how your experience was.