How Blockchain Can Enhance Your Digital Marketing Strategy 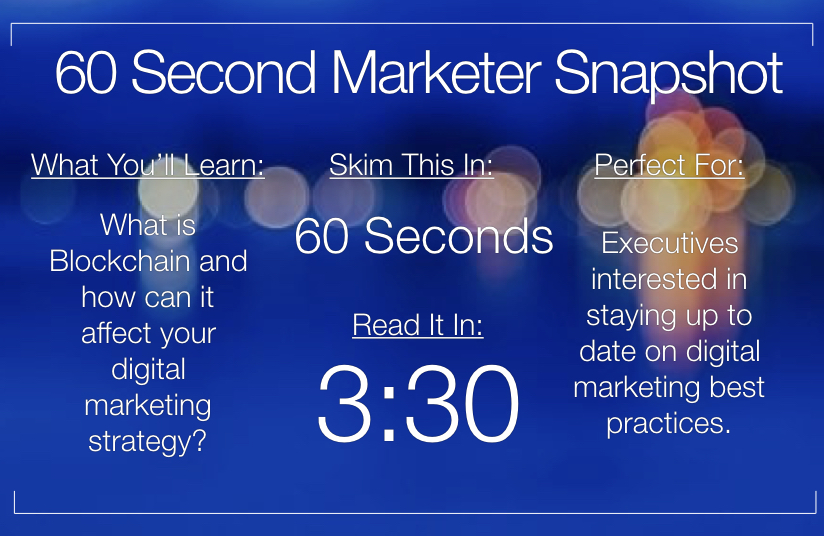 The digital world is highly competitive, in order to establish your brand presence online, you will need to make sure you are prepared to get ahead with your marketing strategy. One way to do this is with Blockchain. Blockchain is a relatively new and emerging technology, but it is sure to shake up the advertising and marketing industry. See our tips below on how Blockchain can enhance your digital marketing strategy.

A Bit About Blockchain

Blockchain is the technology which underlies Bitcoin and other cryptocurrencies. It’s not an easy concept to explain; a bit like trying to explain the internet as it was coming into formation and had not yet settled into its current state.

Effectively, blockchain refers to a decentralized mass of data encrypted on a peer-to-peer network. When new transactions are made (whether that be the exchange of money, information or contractual agreements), the transaction is represented as a block. This ‘block’ is validated by all of the nodes (users) of the network, and then once validated a permanent digital record is made, and the block is added to the chain.

This results in an ever-evolving digital ledger of information; fully transparent, auditable, and with no central authority and no single point of control or failure. Basically, transactions are transparent and fully secure.

Blockchain has also disrupted many other industries already. In real estate, buyers and sellers are able to transact without the need for agents or lawyers, their obligations fulfilled on smart contracts using digital currency. In the entertainment industry, companies have created cryptocurrency poker sites in which the transactions are validated on the blockchain for fair-play, security, and transparency. Blockchain may even one day eliminate the need for a solicitor to draw up contracts.

How does all of this change the marketing industry? Well, blockchain has a tendency to cut out the middleman. In the case of finance, this means the banks. In the case of real estate, it means the agents. In advertising, it is Google (and lately Amazon) who may not be needed.

If you run an advertising campaign, this is usually done via Google (or alternative) Display Network and PPC services. These services match the website owner with vetted advertisers and ensure transactions run smoothly. They also take a pinch of the profits.

Blockchain advertising gives peace of mind to both the site owner and the advertiser. The site owner can rest assured that the advertiser and their services have been validated on the blockchain and that they will be paid fairly for each click made. They can later check the effectiveness of engagement by examining the data on the blockchain, and use this to optimize ad campaigns and ad frequency – thereby giving you another way, among other online methods, to increase your conversion rate.

The advertiser, meanwhile, knows that they are paying for genuine clicks and real traffic, and can see how many clicks have been made. The blockchain validates clicks and can confirm that the target audience saw the ad for the contractually agreed amount of time.

Effectively, the blockchain creates an auditable record of all of the clicks made, as well as facilitating the fair exchange of money (or tokens) for services. It makes the whole advertising process more transparent, allowing both parties more control and security while also reducing costs.

Blockchain marketing doesn’t stop with paid advertising. Site owners and advertisers can even ‘tokenise’ customer behavior. They can offer cryptocurrency tokens in exchange for viewing an advert, or for sharing a video or a piece of information. This could become a valid model in the near future.

Blockchain technology is still breaking through into the mainstream, but companies already offer blockchain marketing as an alternative to Google ad banners and PPC. Companies can utilize these services, or eventually even look into creating their own advertising blockchain systems. Cutting out the middleman is almost always worth it. The blockchain achieves its function in making marketing a more transparent process, without the need for a centralized authority to oversee the transactions.